Well, I am firmly settled into my life here in Atlanta these days.  Between my classes, TA job, church, and dancing, free time is in short supply, indeed.  But I’ve been trying to take at least a little time every week to do something relaxing and fun with friends.  Some of my favorite highlights include:

For their honeymoon, Rachel and Ryan went on a road trip, but they swung back through Georgia on their way back to Oregon, where they are living now.  So I drove up to Ellijay and got to see them for an evening.  It was soooo lovely to be able to just spend time with and enjoy each other, away from the stresses and pressures of wedding fever.

A few days later, I got to see some Fulbright friends!!  Adam and Leora had both renewed their contracts to teach in Korea, but they were visiting some friends in the states before they went back to Asia.  So we met up at a great little Greek falafel place, and then went to a state park and hung out for the afternoon.  It was wonderful seeing them, albeit a little strange – although we’re all Americans, up until then I had never actually seen them in America, so it was odd being together on our “home turf,” so to speak. 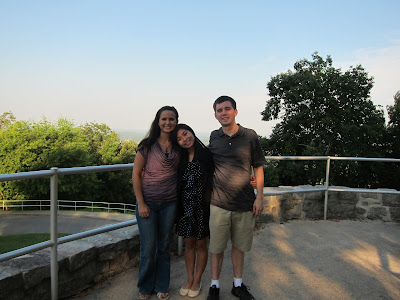 My first weekend after moving to Atlanta, I was back in Albany again – for another wedding.  But this one I just attended – I wasn’t in it – so it was much more relaxing.  I got to spend some time with my family without the stress of preparing for Chris’ wedding….plus we got a great family shot in the process! 🙂

An old family friend, Phillip, came down to visit me shortly after I moved to Atlanta.  It’s been years since we’ve seen each other – one of us was always out of the country – so it was good to reconnect.  We went to Atlantic station and got gourmet ice cream and laughed at all of the country music blaring from the speakers….then, for dinner, we went to a place called Chow Baby, which is now officially my favorite restaurant in the entire city.  It’s like an Asian buffet on steroids.  You go down the line and pick all of the ingredients you want – meats, vegetables, sauces, everything – and then they cook it for you in a delicious stir-fry and deliver it to your table.  Absolutely excellent.  I had a blast :D. 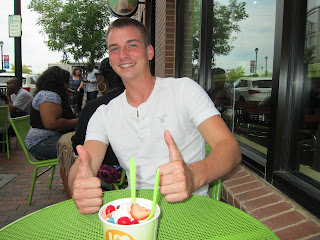 To celebrate labor day, I went on a rafting trip with some old friends, some new friends, some old family, and some new family.  Myself, Chris, Julia, a friend from Berry (Emily), a dancing friend (also named Chris), and a new Tech friend (Sunny, who is also Korean, so she’s doubly cool!) drove up to Tennessee to go whitewater rafting on the Ocoee – the same river that they did the Olympics on in 1996.  It was threatening to rain the entire day, but never actually did, so it was perfect.  I had a blast.  It was a nice retreat from all of the stresses that I was having with my living arrangements at the time.  Bonus points for the fact that I unknowingly made reservations with the exact same rafting company that I had years ago gone rafting with as a part of a youth group trip with from Cornerstone Church in Americus.  So I was having a major walk down memory lane :).

After I moved out of my old house and into the new one, I went to a graduate student picnic.  Not only did I see some of my old housemates from the old house – and we were on great terms, spent the entire picnic together – but I also got to meet Fernando, an awesome guy from Panama.  He was dancing with the GA Tech Salsa club, and I went over and asked him to dance with me :).  Great dancing and great friends – how can you go wrong with that?….and it was also really nice to know that no one at my old house harbored any ill feelings about me moving out.

Also, speaking of housing, check out my new digs!  It’s nothing special, but it’s exactly what I need at this stage in my life.  I’m very happy here.  I also get along really well with all of my roommates, which is always nice.  We cook for each other, run errands for each other, tell each other to go to bed when they’re tired and to eat right, and just generally look out for each other.  It’s a splendid arrangement. 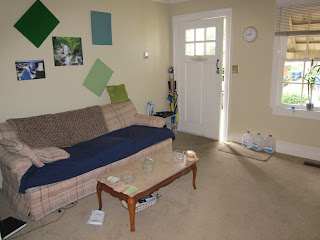 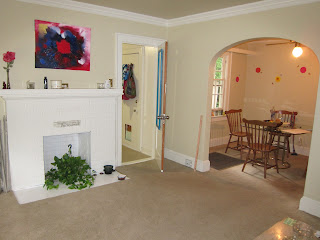 In celebration of Mom, Dad, and Chris’ birthday, the Albany family drove up to Atlanta to have a big family cookout.  Well, it was supposed to be a cookout, but due to torrential rains, it turned into more of a cook-in.  But when you’re with people you love, it doesn’t really matter whether you’re inside or outside.  I had a blast.  That was also the weekend that I acquired a bed, thanks to my incredible parents who drove up a second car just to bring me my bed from Albany, thus making me officially completely moved into my new home. 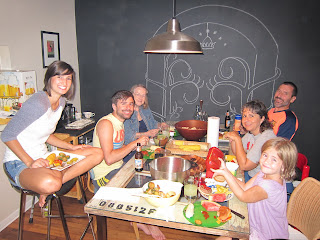 The next weekend was Tech night at Six Flags!  One night every year, Six Flags closes down their park to everyone except GA Tech students.  So I gathered 3 of my new friends, and we all headed down together.   It was myself, Fernando (the Panamanian that I met at the grad picnic), Seth (a Singaporean I randomly met at orientation), at my Korean friend Sunny.  Four people, 4 nationalities…..I was in heaven.  I love connecting with people who come from completely different backgrounds from my own.  We rode every single roller coaster :).  After it ended, everyone was starving, so I took them all back to my house and made them pasta (at like 1:00 in the morning….lol) before taking everyone home.  It took me the whole weekend to recover from it….but it was worth it.  Developing friendships is something that I’m really going to focus on doing while I’m here in Atlanta. 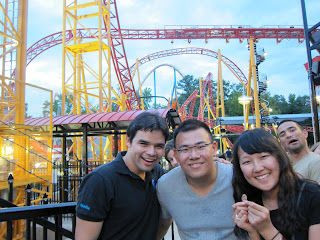 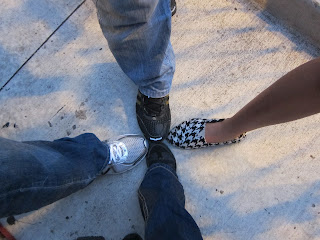 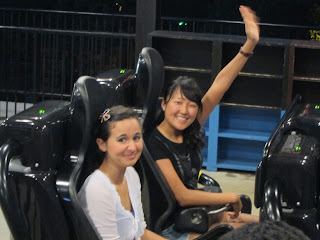 Speaking of cultural experiences…..I had another one last Sunday.  I took my new Mexican housemate with me to church, and we went out to lunch afterwards.  Somehow, we ended up on Buford Highway (which, if you don’t know Atlanta, is known for having an incredibly high latino population), and randomly went to this little restaurant called La Pastorcita.  The food was actually really good – tasty, plentiful, and cheap – but I tell you what, the second I walked in, I couldn’t help but bust out laughing.  Not because I was laughing at anyone, per se….it was just a cultural shock, and I didn’t know what else to do.  I felt like I had walked straight into Mexico.  They had the Mexican music, the sombreros, the Mexican families and couples and groups of men shoved into the boothes, the menus in all Spanish….seriously, it was legit.  Absolutely fabulous…I loved it.  Atlanta is a city in which you can feel as if you were transported to almost any country in the world, if you go to the right place in the city :).

Other notable things which don’t have any pictures attached to them, but deserve at least an honorable mention….I’ve found a fantastic Bible study that meets only 3 houses away from mine, I’ve been dancing to my heart’s content and then some, and I’ve finally started to gain my bearings around the campus and the city.  Can’t think of anything else at the moment….but I’m sure I’ll have more to say in a few days ;).

So there you have it!  Some of the highlights from my life over the last month or so.  It hasn’t all been rosy – classes are incredibly overwhelming at times, I still have lawsuit issues going on with my psycho ex-landlord, my hearts still pines for Korea and my students and friends over there….but overall, I am very blessed.  Blessed, indeed.  God is so good!

Posted by Lauren Fenner on September 18, 2012 in Atlanta, Grad school

I went to a prayer meeting a few nights ago.  While I was there, someone talked about this image that the Lord had given them of the swinging pendulum of a clock.  The pendulum was a symbol of our lives, and how we oscillate back and forth between work and rest.  The pendulum can either swing violently back and forth, with us working so hard that we are eventually forced to rest, and then again forced to abruptly dive back into work; or it can swing gently, with us choosing to work and choosing to rest.

It was an image that resonated strongly with me.  My workload is increasing these days, and my schedule is filling up more and more every day.  After my night class on Monday, I signed up for intramural flag football; after the Tuesday night class is salsa lessons; Wednesday night is Bible study; Thursday night is swing dancing, and Friday I’ll be working with a homeless ministry.  Plus I’m starting to make friends at school, and am eager to begin connecting with them and exploring the city.  It’s a good life that I have here in Atlanta; I enjoy being busy, and I enjoy the things that I’m doing to stay busy.

But make no mistake about it; I am busy.  And therein lies the danger.  There have been times in my life when I have been so busy, that I have neglected the most important things.  I have skipped my quiet times with the Lord, not connected with my family like I should have, and brushed off my friends.  I was swinging violently back and forth, crashing into work and rest, without really doing either of them very well.

So that’s my goal this year.  It’s not to find activities that interest me or to get plugged into things in Atlanta or make new friends – I have zero doubt that that will happen.  The real challenge is learning how to balance it all.  Learning how to manage my time and trust in the Lord, so that I’m swinging gently and sensibly, rather than frenetically and exhaustively.  I’ll have a more detailed update soon! 🙂