I went to Cheonan this weekend to visit my friend Dianna, who taught at my school last year.  It was definitely a long weekend – I spent about 9 hours total on a bus – but it was a lot of fun, too.  So I got there around noon, and after eating lunch with Dianna, the two of us went with another Fulbrighter, Phebe, to see the ancient fortress in Suwon, about an hour away.  Phebe was really excited because the fortress wall is listed as a cultural heritage site or something like that – she kept reminding us that “We’re seeing so much culture!!”  For Dianna and I, who both have extensive experience with Gyeongju, the most historical city in all of Korea, her comments were a little bit laughable.  But it was still a beautiful wall, and I really enjoyed seeing it.  We got there during the day, and stayed until the sun went down, so we got to see the whole range of lighting.  So Dianna took hundreds and hundreds of pictures, and Phebe and I had lots of bonding time to get to know each other :).Sunday morning Dianna and I got up, made breakfast in her apartment, and then headed to church.  It was a great service, uplifting and encouraging, and I always love meeting new people! 🙂  We went to lunch with some of Dianna’s friends from church, plus a newcomer, Ronnie, from Zimbabwe.  ‘Twas a lovely afternoon, indeed.

After getting back from church, Dianna and I made a chocolate pudding in her rice cooker, played a board game while we waited for it to finish, and then I headed back to Gyeongju.  It was, all in all, far too short of a weekend, but I enjoyed it.  One more weekend of traveling, and then hopefully I’ll be done until the end of the semester! 🙂 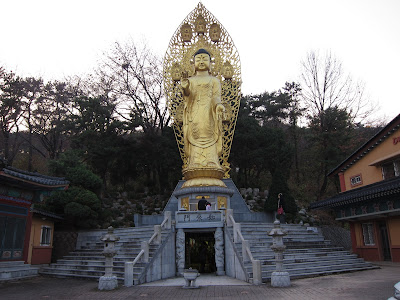 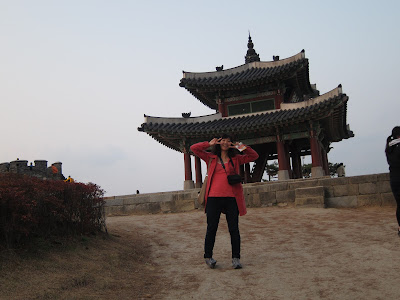 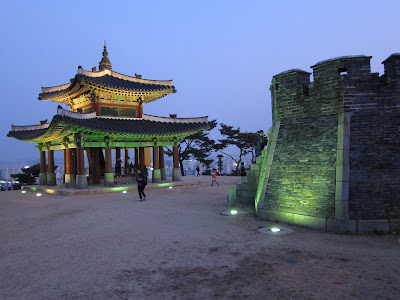 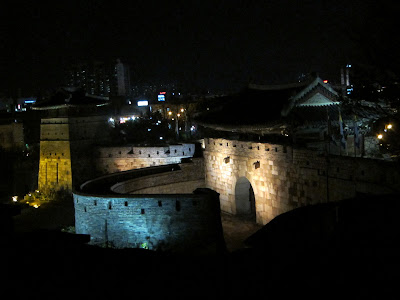 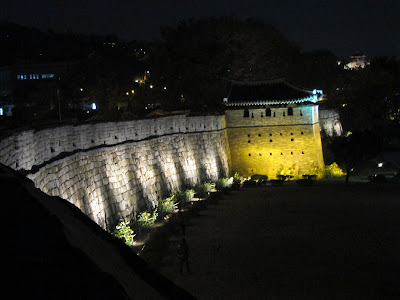 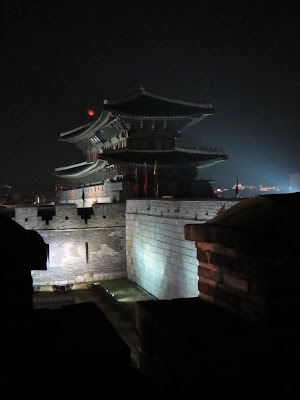 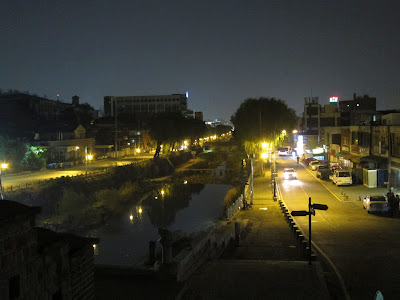 I have so many stories to tell you!  They’ve been running us ragged these past few days; I’ve barely had time to think, let along write.  But the craziness seems to have finally quieted down a bit, so it’s time to pick up my metaphorical pen again 🙂

Friday was a very interesting day.  We separated into several different groups and then went to different schools all over Korea.  We got to sit in and observe 2 different classes of a current Fulbright ETA (English Teaching Assistant – what I will be! :]).  We had lunch with the other teachers of the school, got to talk to some of the students in the class, and asked Rachael (the ETA) questions about what it’s like to teach in a Korean classroom.  It was very informative.  I went to a co-ed high school in 대적 (Daejun), so I got to observe an advanced all-boys class, and a beginner all-girls class.  Although I got the impression that what I witnessed was not a very representative example of what I can expect to see in my own classroom – Rachael was in a brand new school, she had her own classroom, the school administrators were very flexible, and her students’ English level was very high, all of which is atypical for a Korean school – it was still very informative to see.  This is the first year that future ETAs have had the opportunity to go and visit school before they actually started teaching, and I’m really glad that I got the opportunity to do so.

Friday night there was a 팥빙수 (Patbingsu) party!  The winning team of the photo scavenger hunt was treated by the orientation coordinators to Patbingsu, a traditional Korean dessert.  Well, my team happened to win (I showed you some of my team’s pictures from the hunt in my blog post called “Adjusting to my new life”), so I got to experience this first hand.  I had no idea what to expect, but I had heard many many people rave about it, so I went with high expectations.

Would you like to know what Patbingsu is?  It is a large cup full of shaved ice, which is then topped by a variety of different toppings.  Mine had ice cream, mandarin oranges, watermelon, apples, something the approximate consistency of corn flakes, a type of mini marshmallows made out of rice paste, and red beans.  Yes, red beans.  It was a very, very strange combination, but surprisingly, very good.  I enjoyed it thoroughly.  Especially because it was free :).

Saturday was just as filled as the rest of our week with classes and workshops.  I’m already soooo sick of sitting – and I’ve still got 5 more weeks to endure!!  I sit for at least 8 hours every day.  I’m always using my brain, and never using my muscles.  It’s completely draining.  I’ve been playing alot of ping-pong in my infrequent spare time to release all of that pent-up energy.  I now have a target on my back – I haven’t been beaten yet, and all of the boys find that simply unacceptable.  It’s awesome :).  I was also really glad when Taekwondo started yesterday (Monday).  I get to release all my pent-up energy and frustrations by yelling and punching and kicking things.  It’s great, I’m really enjoying it :).
Sunday I went on an excursion with a group of other ETAs to 천안 (Cheonan).  We took 2 different buses to get there (I love public transportation!! :]), and then spent the afternoon either shopping or just hanging out and exploring the city.  I decided to go to Cheonan because I was thinking that I would like to be placed there, and I wanted to go and scope out the city before I requested it.  Turns out…I love it!  It’s a great sized city – not totally overwhelming, but big enough to be entertaining.  It’s also really close to Seoul – it’s actually on the Seoul subway line, in fact – which would be awesome for dancing! 🙂  I’m trying not to get my hopes up, because we’re not guaranteed to get the places that we request….but teaching in Cheonan would be awesome :).


Monday was super busy.  I had Korean class (and my first test!), teaching workshops, GLEE club, Taekwondo, Calligraphy, studying, a lesson plan to prepare, and a Bible study.  Deciding to go to the Bible study meant that I did not get to bed until after midnight – and I was paying for that the next day – but I’m SOOO glad that I went.  There were about a dozen of us, and it was just so encouraging to be able to share and read the Bible and pray and encouraged and be encouraged with other believers.  I just love that God never fails to send Christian fellowship my way when I need it, wherever I am.  God is not limited by national boundaries.  Bible study is definitely going to become a regular in my schedule during orientation :).

Speaking of schedules, I also decided to drop Calligraphy.  As much as I would like to take it, there’s simply not enough of me to go around.  Between all of my other obligations, and trying to study Korean as much as possible, 2 hours of Calligraphy every week was just too much.  The second after I made that decision, I felt such relief.  It’s like my body knew that it was going to get a rest.  I like to keep myself busy, but I also know my limits.  See, I AM taking care of myself over here!! 🙂

Well, I’ve got to draw this post to a close.  The US Embassy is visiting tomorrow, so classes are starting even earlier than usual so that we can be done by the time they show up.  It should be way cool!