Where does one start telling about their life when their entire life has changed in less than 24 hours?  How do you explain everything that’s happened, or all of the crazy, mixed-up emotions you’re feeling?  That is the dilemma that I face right now.  I will do my best to fill in as many gaps as possible :).

Life was an absolute whirlwind after we got back from Seoul.  We spent all afternoon on Tuesday packing to leave for our homestays, and then had an ETA talent show in the evening.  On Wednesday we got to meet all of the renewing ETAs.  Since they had already been through orientation once the year before, they did not have to come to Korea early like we did, so we hadn’t met any of them before.  There are 25 renewees, and they’re all awesome.  Wednesday was a sort of “meet and greet” day, so that the new ETAs could get to know the old ones, and vice-versa.  We had group games, in which people were divided into teams based on the ETAs that were in their same province, and we battled it out to beat out the other provinces.  There was a scavenger hunt that sent us to some of our favorites orientation haunts all over campus.  We ended the evening with a dance – never a bad way to end a day :). 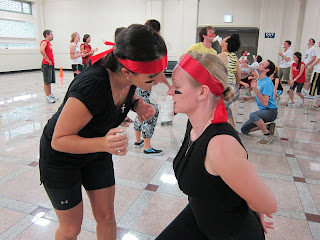 Thursday, however, was a very different day.  Thursday was departure day – affectionately known by the ETAs as D-day – the day that all of the ETAs leave from the comfortable bubble of orientation, and go to their new home for the next year.  The day started off super early, as we had to be all packed and dressed and checked out of our rooms before breakfast.  After breakfast, we had a few hours before the departure ceremony started to say our goodbyes.  I was OK until the speeches by the orientation coordinators started.  Then I lost it and the tears started.  I was not the only one.  It was a very emotional morning.  But, despite the tears, the show must go on, and so we all dried our tears and put on an extra layer of makeup and tried to make it look like we had not been crying.

Once the ceremony started, however, the sadness went away.  Every Fulbright ETA is assigned a Korean co-teacher to help them get through the year.  All of the co-teachers were in attendance, as well as some of the principles and vice-principles of the schools.  On more than one occasion, the co-teacher would run up and give the ETA a huge bouquet of flowers when their name was called.  Probably about half of the ETAs were holding flowers or other gifts by the end of the ceremony.  It was so cool to see how happy all of these people were to have these foreigners that they had never met come to their school for a year.  Even though I didn’t get flowers at the ceremony, I was giddy with happiness at just seeing them given to other people.

After the ceremony, we all had lunch with our co-teachers and principles.  Alot of ETAs had commented before D-day that they were worried about having a very awkward lunch, since they didn’t know these people at all.  I don’t know if that actually turned out to be the case for them, but it certainly wasn’t true for me.  My co-teacher and I clicked almost instantly.  He seems like he’s really chill, really easy to work with, and super nice.  His English is very good, too, which is always a plus :).  My principle, who doesn’t speak very much English at all, was also at lunch.  Even though we couldn’t communicate much, he seemed very nice and worried about my well-being.  I found out later that he had studied dancing (I think in college), which instantaneously made him so much cooler than he was before :).

The ride to Gyeongju was long, but interesting.  My co-teacher (his English name is Shane) and I talked for most of the trip.  Well, apparently I talked for most of the trip – they took me to dinner when we got to Gyeongju, and he commented that I must be very hungry, since I had talked so much in the car.  Woops.  I guess I’ll have to learn to shut up sometimes, lol :).  But ya, dinner was really cool.  Several of the other English teachers came, and also the owner of the school (it’s a private school), in addition to the principle and Shane.  They brought flowers for me to the restaurant….I felt so loved I could cry.  There was alot of laughing at this giddy American girl, but I just laughed back, and I think that they really liked me – I know that I liked them.

After dinner, they took me to see the school.  It’s beautiful.  They have a brand-new English hall – as in, so new that it’s not even officially open yet – where I’ll be spending most of my time.  It’s gorgeous.  I’m so excited to spend my days there.  There is also a lovely walking garden outside that is open for all of the teachers to spend time in.  Between that and the English hall, I’m never going to want to leave my school.

Butttt….I also have an awesome host family to spend time with!  After the visit to the school, Shane finally took me to my homestay.  It was late and I had had a super long day and I was exhausted, but I didn’t want to start a precedence the first night of hiding in my room, so I made an effort to stay up some and visit with them.  My host parents, although they don’t speak any English, are so so sweet.  They told me, with the help of their daughter, Songye, that they want me to feel like I am one of their own daughters, and that they will treat me as such, as well.  They quickly found out that I do not have a boyfriend (Koreans are very blunt about asking about such things), to which my host father said something to the effect of, “American boys must all be very stupid, if none of them want to date you – you are so beautiful!”  To which I laughed and explained that I don’t have a boyfriend because I don’t want one right now, but it was still very cute.

Today (Friday) many ETAs had to go to school, but I did not, so I’ve spent the day unpacking and catching up on emails and other necessary stuff.  This morning I was talking with my host sisters (Songye and Arim), and they decided that they wanted to meet some of my American friends.  So we Skyped with a couple of people who happened to be online at the time.  They thought it was hilarious (and apparently ALL of my guy friends are super super handsome!!), and I got to catch up with some friends, so it was a win-win all around.  I also have to prepare an introductory speech for the whole school on Monday – that’s a bit nerve-wracking =/.

So overall, life is very good.  I’m very happy – much happier than I thought I’d be on day 1 of my homestay.  First day of school is in 2 days!!  Hopefully I won’t totally botch my speech – or my lesson!  I’ll keep you updated.  Love you buckets!