This weekend I went on a retreat with some members of my Gyeongju church.  Myself, Anthony, and Harry left early Friday evening for Daegu, about an hour away by bus.  Because we left so late and I didn’t have school during the day, I had time to get a massage, study some Korean and Spanish with Shi-yeon, and overall just have a relaxing day.So around six, we left for Daegu.  We grabbed some dinner – I hadn’t eaten anything all day, I had kind of just forgotten about it – and then met the bus that would take us to the retreat center.  It was a rather secluded place, about 45 minutes away from Daegu – although I must admit, I haven’t a clue which direction it was in relation to Daegu, lol….I just kind of went with the flow.  Seems to be my life in Korea these days…

But anyway ya, the retreat was awesome.  Friday night, after we got there, there was a big campfire.  We talked, and toasted marshmallows, and made s’mores, and sang worship music accompanied only by a guitar and our voices.  Our sleeping arrangements were a mixture of Korean style and high school camps – we slept on the floor, but crammed as many people into a room as we could.  Our room had 10 women sleeping in an area hardly bigger than my bedroom in the States.  Needless to say, we all got to know each other reallyyyy well this weekend, lol. 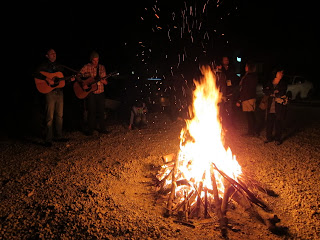 The next day, Saturday, there were 4 sessions, 2 in the morning and 2 in the afternoon.  In the middle of the day, there was a rugby match, which of course I participated in.  I was the only girl for most of the game, and I didn’t have a clue what I was doing, but it was fun, anyway.  I’m pretty sore today, though…. =/.  There was one more session on Sunday morning, and then we all loaded the buses and headed back to Daegu.  The retreat was sponsored by a church in Daegu, Dongshin, and their English service is held on Sunday afternoons at 2.  So I hung around in Daegu for a bit and then went to the Dongshin service, as well.  But by that time I could barely keep my eyes open due to lack of sleep, and I was glad when I finally got back home to Gyeongju. 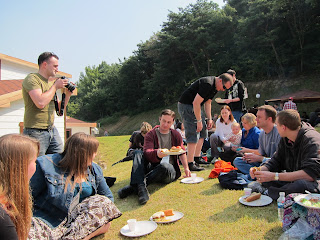 But what a weekend it was.  I learned so much – I’m still trying to process it at the moment, but it was really quite incredible.  Being able to worship God, to listen to Him, to take time away from the business and stress of the world and just focus on Him for a while, to meet and be encouraged by other believers, to hear their stories and share my struggles with them….it was so amazingly refreshing.  Exactly what I needed in the middle of a crazy month and stressful homestay :).  Next stop: Seoul and Hwacheon!!