Well, another few days in Korea have been successfully survived!  And no, “survival” is not an exaggeration.  Every day I look at the calendar and am utterly astonished that only one day – or less – has passed.  It seems like I have been in South Korea months and months and months….but it’s only been 2 weeks.  I never thought it possible to pack so much into so little time as they have been doing here during orientation.  All of the returning ETAs assure us that we will have much more free time on our hands once we get to our schools….I sure hope so, because at this pace I will be dead by November.

The entourage from the American Embassy came on Wednesday, like I mentioned last week.  It was really cool.  They talked about all sorts of random stuff that you never think about needing help with until the situation is upon you.  Well, now I know what to do!  And mom and dad, don’t worry, if I get incarcerated while here, the Embassy will visit me every 6 months, or anytime I request a visit ;).

The next day, Thursday, was panel day.  A bunch of returning ETAs came and talked to us about all sorts of things – schools, traveling, homestays, locations….you name it, they mentioned it.  It was informative; however, at the same time, I’m starting to feel like I’m on information overload.  They’ve thrown so much information at us in such a short time, that it’s all starting to sound the same.  Really, I think there are some things that we’re just going to have to figure out for ourselves.

Friday morning, bright and early, we left for a weekend in Donghae, courtesy of the Korea-America Educational Commission, the umbrella organization for Fulbright Korea.  It was about a three hour bus ride to Donghae from Jungwon, during which I slept for most of it, while trying unsuccessfully to study for my text on Monday.  After checking into the hotel, we made our way to a Buddhist temple (Samhwasa temple).  It was interesting to see, but at the same time I felt very out of place.  We even stayed for the evening worship service; again, cool to see, but I have to admit that I was glad to leave at the end of the day.

The temple was nestled in the mountains, amid streams and trees and all sorts of other lovely things.  We stopped and played in the water and on the rocks before heading back to the buses.  I think that I was slightly worrying my orientation coordinators when I all of a sudden stopped and insisted that I have a cigarette immediately.  But no, I had not discovered a sudden urge to smoke tobacco.  I got stung by a wasp on the way down, and years ago my dad had taught me this great remedy for drawing out the poison by putting a tobacco paste on the wound.  So I got my cigarette, fixed my leg, and got some funny smiles in the process :). 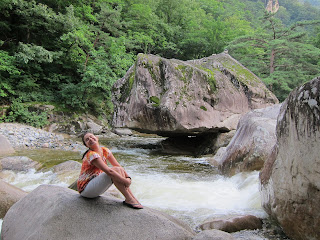 Saturday was glorious.  We had the entire day to do whatever we wanted – no meetings, no classes, no nothing.  I went to the beach for a few hours in the morning – it was a beautiful day – and then went and explored a beach cave that I had read about in a tourist brochure.  It’s really random – it’s this huge natural cave located right in the center of downtown Donghae.  I love caves, and this one certainly did not disappoint.

Dinner the first night was simply a huge buffet, of which the most exciting thing that I ate was a tiny octopus – the entire animal was only about the size of a golf ball.  I’d had octopus before, but never a whole one; even though I don’t really like octopus, I ate it just to be able to say I did :).  Far more exciting, however, was Saturday night dinner.  Samgyeopsal (삼겹살) – pig stomach – is a very popular Korean dish.  It’s also a very unique cultural experience.  We are seated at tables with small grills built right into the table, and then the waiters bring out plates of raw slabs of meat.  The diners grilled the meat themselves at the table, which is then wrapped up into pieces of lettuce with slices of garlic, peppers, onions, chili pepper, kimchi (we grilled ours right along with the meat!), mushrooms, sesame oil, plus a host of other things which I have no idea what they are called.  So you wrap it all up in the lettuce, and eat it with your hands; definitely NOT a good first date meal! 🙂  Aside from the initial distaste at the thought of eating pig stomach, it was delicious, and tons of fun to make, too!  That’s why I don’t ever ask what I’m eating in a foreign country before I eat it, lol… 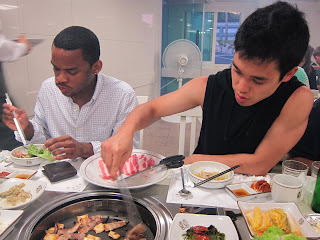 Sunday morning we checked out of the hotel.  It was a wonderful weekend, but I must say I’ll be glad to have a bed again.  I spent the whole weekend sleeping on the marble floor – many parts of Korea don’t use beds; they simply put a sheet on the ground.

On our way back to Jungwon, we stopped at a museum for several hours.  This place was owned by the same man who owns both Jungwon University and the hotel we stayed at in Donghae, and it is meant to house his own private collection.  It was a very eclectic collection – it had geology, fossils, and art from all different nations – Maya, Inca, Europe, China, Korea, India, etc.  It was unlike any museum I’ve ever seen, and I really enjoyed wandering the halls and seeing and discovering new things. 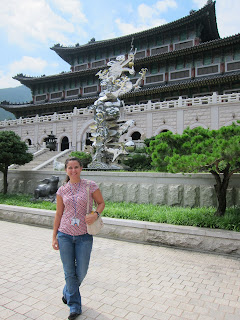 So the weekend was wonderful, but now it’s back to the daily grind.  I’ve got 2 meetings tonight, a test in Korean tomorrow, an assignment due on Tuesday, plus Camp Fulbright starts this week, so I’m also going to be observing and teaching classes.  Oh well, I guess all good things must come to an end….**sigh**.  Time to hit the books; I love y’all!