I’ve been super busy these days.  The clock keeps counting down, but I try to ignore it, and just enjoy each day as it comes.  New deadlines at school have kept me hopping at work, and the litany of things that must be done to wrap up a year of living in a foreign country have assured that I’m never bored outside of work.

But in between the monotonous and the mundane, there have been some beautiful moments.  My favorite this week was undoubtedly Sunday.  My church threw me a going away party in the evening after church.  A large percentage of my congregation is from the Philippines, so they all got together and made a Filippino feast for us.  There was shrimp, and marinated beef, and flan (yummy!!), and lots of other stuff which I have no idea what it was called, but it was delicious, anyway.

About 20 people came (which, when you only have a church of maybe 35 or 40, is a really high percentage!  Lol…), and we ate together and talked and laughed, and just overall enjoyed each other’s company.  They surprised me with a cake (made me blow the candles out and everything!), and a slide show with pictures and messages saying things like “we’ll miss you, Lauren!” and “We love you!”.  I may have shed a tear or two.  It was beautiful.  I will miss them so much.

Oh, I almost forgot!  After dinner, we all gathered around and watched Courageous, the most recent production of my home church, Sherwood Baptist.  My friend James had sent it to me as part of a care package earlier in the year, and when I suggested that we watch it as a church, everyone agreed.  It was a nice end to the evening.  One of the Korea pastors liked it so much that he asked me how to get a copy.  I gave him mine.  I figured it was the best use of the gift that James had given me :).

My second favorite moment this week happened the next day, on Monday night.  A friend of mine from college, Emily, got a scholarship to come to Korea.  She arrived about a week ago, but has been spending most of her time in Seoul.  Well, this weekend her program came down to Gyeongju, and I actually got to meet up with her.  We went for a walk, and spent about 2 hours catching up.  It was great to see her, and also a good way to mentally start preparing myself for my impending new reality – the one in which I’ll be able to have fluent conversations like that with almost every single person that I meet.  It was a very nice ending to my day.  Thirteen days until touchdown! 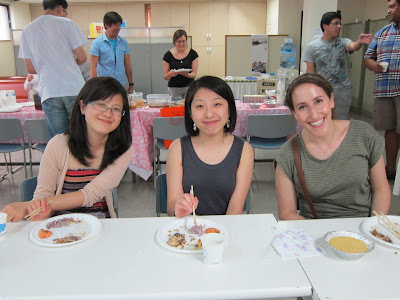 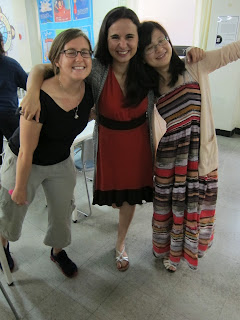 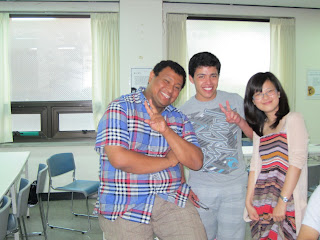 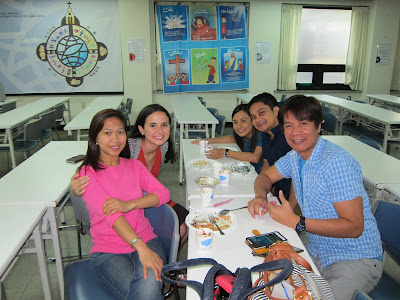 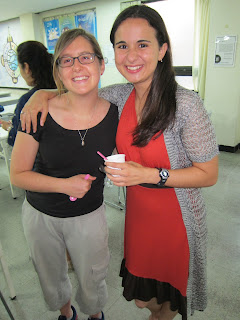 I’ve had quite a week.  Forget about all of the field trips and festivals and other exciting things I’ve witness during my 6 months in Korea.  This has been the type of fun that you can’t plan for.

Last Friday was another open mic night at Grazie, the last one that Anthony and I would both be at.  So I asked him to accompany me on a song, as sort of a “last hurrah” for us, if you will.  So he did, and it was a lot of fun.  We sang “Painting pictures of Egypt,” which is a metaphorical song that alludes to the Israelites’ 40 years of wandering in the desert, which I thought was a very fitting song to sing in the presence of so many people who are in transitionary periods of their lives.  But the best part, for me, was that In-suk, my host sister, came with me!  It was so cool to be able to share this part of my life, usually so separate from the life of ordinary Koreans, with my host sister.  Check out the video of me singing below :).

Saturday night was the reverse – I was the foreigner on Korean territory.  Several of my students had asked me weeks ago if I would go out with them Saturday night, the night after their finals ended, when they would finally have some time to breathe.  I agreed, of course – I never turn down an opportunity to spend time with my wonderful students – so a date was made.  I was a little worried that they were expecting me to pick up the entire tab, but we went dutch the entire time, so that was good.  I was so proud of my students – they were trying to speak in English almost the entire evening, even with each other!  When just my presence gives them such an incentive to try and speak in English, how on earth can I begrudge them my time when they ask for it??  And besides, I had a blast – we went and took sticker pictures, and had coffee (or green tea, in my case), and went to dinner, and sang karaoke, and even bought matching phone dangles for our cell phones.  It was a blast, and an evening that I’m not likely to soon forget. 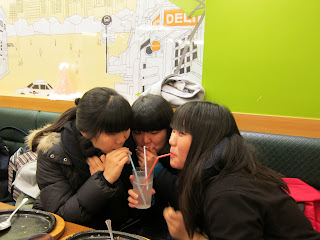 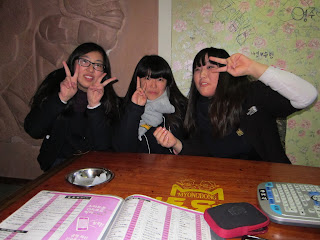 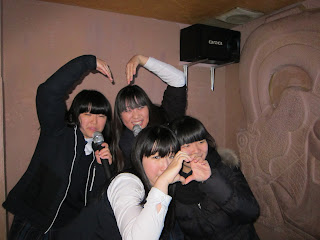 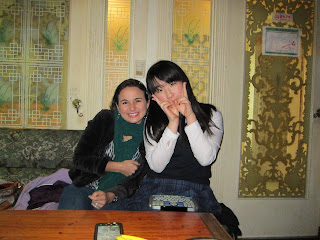 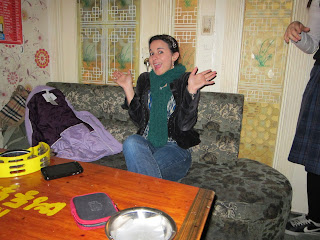 The next day, Sunday, my friend Anthony invited me to a party after church.  It was a party hosted by the Filipino community for the Filipino community in Gyeongju…although I am not Philippina, Anthony is, and he invited me to tag along.  So mid-afternoon I met him (after being regaled by my host mother and sister on the piano for the past hour), and we made our way to the church that was hosting it.  We originally went to the wrong church, but we ended up meeting a co-teacher of Anthony’s who helped us straighten it out, so it was all good.  It’s good for me to hang out with Anthony – it teaches me not to worry if things don’t always work out as planned :). 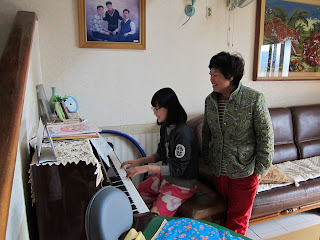 So anyway, we finally found the party, and it was a blast.  I met a lot of cool people, was introduced to Filipino food, and even won a 6-pack of soap because my team won the balloon-popping game.  Plus, this may sound shallow, but I’m going to say it anyway….there were so many hispanic-looking men there!  I know they weren’t technically hispanic, but they looked like it, and I was very happy…I definitely go for the tall, dark, and handsome type.  I’ve been a bit deprived working at an all-girls’ school in Korea, lol.  Hearing Tagalog, however (the language of the Philippines), really threw me for a loop.  Tagalog is a mixture of Spanish, English, and a lot of its own unique flavor, too – constantly flip-flopping between understanding a bit and then not understanding left my brain really hurting! 🙂 In the end, though, I was really sad when I had to leave – the party was just getting started! 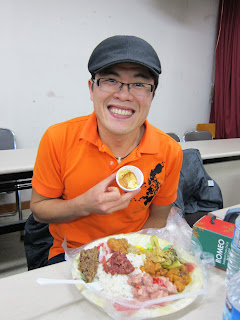 But the reason I had to leave was because I was making dinner for my host family!  I had asked them about a week ago if I could make dinner for them, and surprisingly enough, they had agreed.  My host sister, In-suk, really wanted to help, so I let her stay, but the parents we kicked out of the kitchen.  We made fajitas, with chocolate chip cookies for dessert, and it was a huge success.  Although I must say, the images of them staring with confusion at these empty tortillas and huge skillet of meat and vegetables, or trying to eat fajitas with chopsticks, or insisting on adding kimchi to the filling, are ones that will stick with me a long time :).  But overall, definitely a success and lots of fun.  I also gave them their Christmas presents, which they really seemed to like.  Afterwards, we went upstairs and sang karaoke (they have a karaoke machine in their house!!!) and then went to bed. 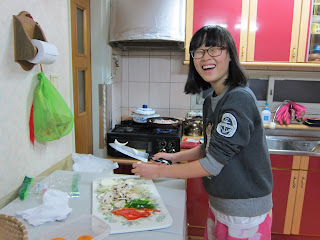 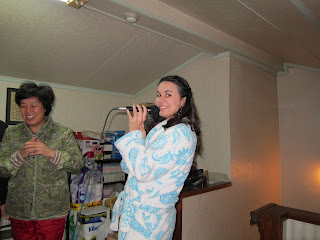 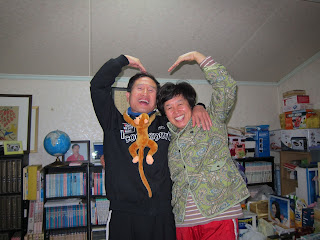 If I could, I would have weekends like this every single week.  Even though I didn’t go anywhere, I had more fun this weekend at Grazie, with my students, at the Filipino party and with my host family than I have in a very long time.  It was a wonderful way to end the first half of my stay in Korea.  The next few days quickly disappeared in a blur of final classes, tearful goodbyes and heartfelt sentiments from my students, and preparations for America.  Look for more about my stay in America on the next adventure of Sinbad! 🙂