It’s a curious thing, indeed, that even the most mundane things can seem interesting to us when we are abroad.  I’ve often noticed this phenomenon in my many travels – every restaurant, historical site, performance, or even ice cream shop or cafe can be charming and alluring when you’re in another country.  But then, I get back to the states, and I forget that intrigue, that child-like fascination with every experience that comes my way.

I didn’t really realize that I had lost this interest, until I started hanging out with foreign friends here in Atlanta.  And all of a sudden their thirst to experience everything that Atlanta had to offer, their passion to understand as many facets of this culture as they possibly could, and their desire for new experiences was totally putting me to shame.

So for the past few weeks, in the middle of my crazy busy schedule, I’ve been trying to sit back and find some of that interest, that allure, that intrigue, from my own culture – the one that I’m most likely to take for granted.  Here’s a few of the highlights from the month of October.

I went to a fantastical restaurant called Dante’s Down the Hatch with some friends.  It’s a fondue restaurant, which is already cool enough in itself – I had never had fondue before.  But then, on top of that, the entire restaurant looks like the inside of a massive ship – hence the name, I suppose.  You could walk through the “ship’s” walkways and into the galley and such while you were waiting for your delicious fondue to arrive.  Definitely a multi-sensory experience!!

I went to a ballroom competition in mid-October.  At this point I had actually gotten rather burnt out on dancing, so it was a nice change to sit back and just watch it.  Plus, the styles were completely different from what I’m used to, so that was fun, too.  Was definitely a memorable evening… 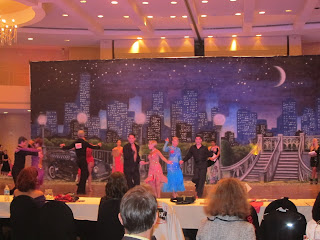 For fall break, my family mixed it up some and came to visit me, instead of the other way around!  What a joy it was to be able to host them, instead of being the one hosted.  Mom and I cooked a nice dinner (it was the first time that she had cooked something in my kitchen! :]), and then Chris and Julia came over to eat with all of us.  The only person missing was dad, but he was there in spirit! 🙂  I’m looking forward to many more visits like that….it blessed me in so many ways! 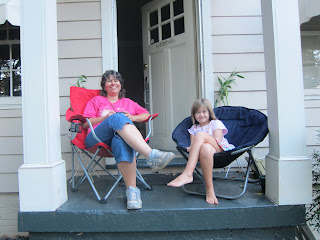 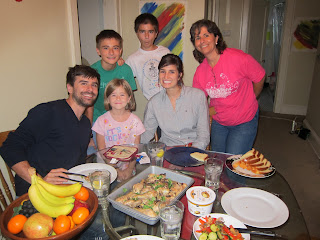 I went to a Korean barbecue place with some friends from school.  I was soooooo excited before going – it was the first time I had eaten Korean food since I came back!  But I have to admit, I was sorely disappointed.  It was expensive, and honestly not very good, and they didn’t even let us grill it ourselves, which is half of the fun of Korean barbecue!  Lame.  I guess living in Korea has spoiled me. I should have known better – I didn’t eat American food in Korea, because they can’t make it the “right” way; why would I have thought that Americans can do Korean food any better??  Ahh well, live and learn, it was still an experience :).  The hunt continues for an authentic Korean food place!!

Had an interesting Friday night a few weeks ago.  The Fernbank museum of natural history was having a salsa and bachata night – in the middle of the museum.  So I dragged my friend Fernando along – we actually met at a dance, so it was fitting that he come with me – and then met some other friends from the Tech salsa club there.  It was really cool, with DJs and dancers and drinks all spread out amid the museum exhibits and such.  I can’t say that I’ve ever danced under a dinosaur before, lol.  Now I can check that off of my list!  Not that it was actually on my list to begin with….but if it was, it’s been checked off now! 😉

This past week was really a momentous week in my life.  I went to TWO different sporting events – in a single week!  For someone who’s never in her entire life been to either a professional basketball or football game, going to one of each in a single week was quite a feat!  What can I say, I’m trying hard to find the allure of my own culture… 😉
So the first game I went to was an Atlanta Hawks basketball game.  Two German friends of mine, Theresa and Carston, had an extra ticket, and so they invited me to come along.  We went to Johnny Rockets first for dinner, and then headed over to the game.  I was a little underwhelmed.  Perhaps it’s because it was a pre-season game, so the crowd wasn’t as into it as they would normally be, but I wasn’t particularly impressed.  I had a good time with my friends though, and the mascot was certainly fun to watch ;). 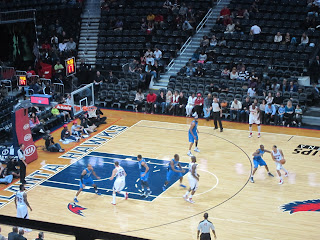 My second sporting event was GA Tech’s homecoming football game.  I figured if I was going to go to a football game, a homecoming game was a good day to go.  The pre-game festivities for this one were much more impressive than at the basketball game – there was a tailgate with my department before the game, and also a parade and great halftime performance.  But at least the Hawks won the game.  GA Tech lost 40-17, so that put a bit of a damper on the festivities.  However, I really feel no personal attachement to the team at all (don’t tell any of my fellow Tech students!), so it didn’t bother me that much.  I just went and admired the general atmosphere.  So I can now say that I’ve been to a football game; I don’t see myself ever going again, though.  It’s not that it wasn’t fun – it’s just that I can think of tons of alternative activities to do that I would enjoy more :).  Anyway, off to the books for me now!  I shall try to be more diligent in writing over the next month! 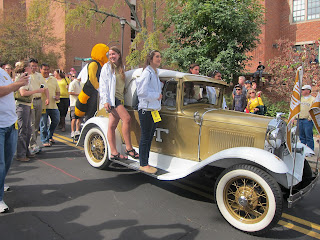 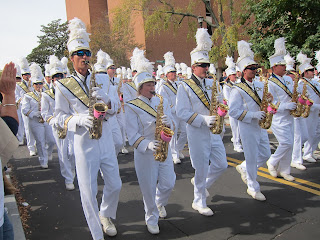 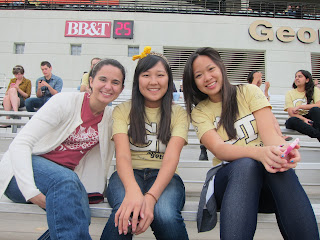 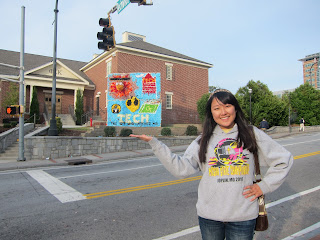