We returned from New Jersey a few days before New Year’s Eve.  But was that enough traveling for me??  Oh no, Miss Glutton-for-punishment still had over a week of traveling remaining.  My parents dropped me off in Atlanta; while they went on to Birmingham to spend New Year’s Eve with old family friends, I hopped on a bus and went down to Orlando to spend it with new ones.

My good friend Sarah (the same one whose wedding I was in in October) moved to Texas shortly after her wedding.  Her sister, Hannah, with whom I also got very close over the wedding weekend, lives in North Carolina.  However, it just so happened that they were both (along with their husbands, of course ;]) in Orlando, visiting their parents.  So, I told myself, what better time to visit!  Kill several birds with one stone – go to 1 place and get to see several good friends who are normally scattered all over the country! 🙂  And so it was that I arrived in Orlando on the evening of the 29th.

From the moment I arrived until my departure, it was nonstop mayhem.  Now, please do not mistake me; mayhem is not always meant in a pejorative sense, and in this particular instance it’s definitely meant in a positive light.  While we were almost constantly doing something the entire 6 days that I was there, they were all wonderful things.  I had a lovely time reconnecting with this wonderful family; the only downside was that as my sleep deprivation increased throughout the week, so did my irritability – it had reached a critical level by the end of the week.  Sleep must be a priority for both my happiness and the happiness of those around me, lol.  🙂

But anyway, a few highlights from the week:

We went to Busche Gardens my first full day in Orlando.  What a place!  Where else in the world can you find giraffes, hippos, and lions (both real and topiary), water rides and roller coasters, trains and zip lines, Egyptian artwork, ice skating performances by world-class skaters, singing and dancing performances, dippin’ dots and spanish empanadas….and I’m sure I’m forgetting a myriad of other things, too…all in one place??  It was a lot of fun – like a grown-up playground.  And then, I’m sure completely out of concern for our well-being, the park employees even threw in a built-in workout!  Many of the rides were closed, so we ended up walking a lot more than we had expected to ;).  So yeah…..that may have been a bit frustrating, but it really was a lovely day – definitely a bonding experience for us all ;). 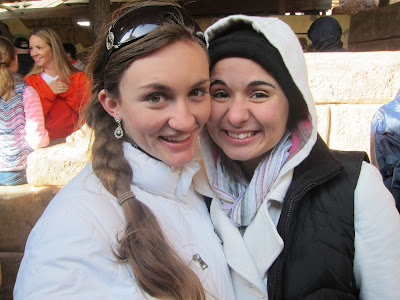 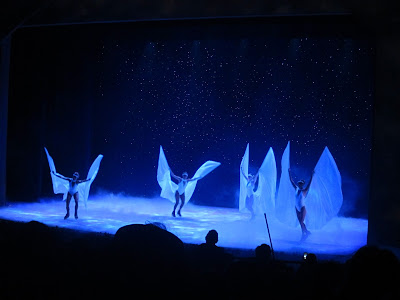 For New Year’s Eve, we had a wine and bread tasting party.  There were some incredibly exotic (and, I’m sure, expensive) wines that made appearances.  It almost made me wish that I enjoyed alcohol!  But nevertheless, the bread was super yummy, and the company lovely; I made it just long enough to watch the ball drop, and then went home and went to bed :).

The Reichel’s have a New Year’s Day tradition in which they go to a famous pancake house for breakfast on the first of the year, so this year they brought me along with them.  It’s apparently really famous – there was an hour and a half wait – but there was a little lake and place where you could walk around, so it wasn’t hard to amuse ourselves.  I even got a photo-op with a couple of planes!! 🙂 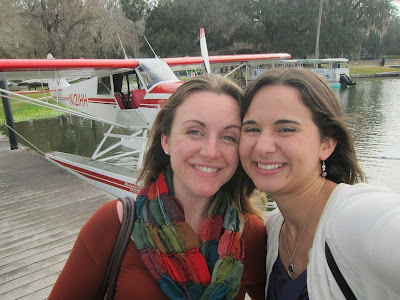 Sarah and I went on a bike ride one morning, and then had breakfast at Panera’s.  With all of the craziness and people coming and going throughout the week, it was so wonderful to be able to have 2 whole hours of uninterrupted time with her.  Definitely just what my heart needed :).

Jonathan and I saw Les Miserables together, and then met Hannah and her husband Josh and a friend at a portable ice skating rink.  It was fun, although I must admit also rather disconcerting to be ice skating when the outside temperature had to have been in the 60’s.

The night before I left (my birthday!), we went to an Irish pub in downtown Disney.  It was not my first choice for celebrating my birthday, but it also happened to be Josh’s birthday, and he was really dead-set on going, so in the interest of keeping the peace I went along with them.  It ended up being pretty cool – there were live musicians and Irish dancers, the food was delicious, and the band even sang for Josh and me to wish us happy birthday!  But by that point, I was so dead tired, I probably would have been just as happy doing nothing and just going to bed, lol. My departure from Orlando was a little more exciting than I would have liked.  There were 4 accidents on the highway to the bus stop, and the traffic was so backed up that I ended up missing my bus.  We were within half a mile of the station, in standstill traffic, so I got out and started running on the highway in a desperate rush to get there on time – it was something straight out of a movie!  Just picture me, running along the shoulder, my jeans wet almost to my knees from the drizzling rain, with Jon running behind me in his dress shoes and slacks pulling my roller bag, scrambling like mad people to catch the bus…ut alas, it was all for naught, and I still missed it.  But I am blessed with wonderful friends who offered to drive me on to my next destination – Jacksonville – and so the journey continued.

I was only in Jacksonville for a few days – my pastor from Korea and his family were there, and his wife had planned a surprise birthday party for him.  So I showed up for a few days to celebrate with them and to see the whole family.  It was so good to see them – definitely made me nostalgic for Korea again, though!

All of this time spent with other people’s families was wonderful, but by the end of the week, I was definitely ready to get back to my own.  No matter how welcoming people may be, it’s never the same as spending time with your own family! 🙂  So I came back to Albany for a day, had dinner with my family, collected my stuff, and then headed back up to Atlanta and started classes the next day!  And moving back to Atlanta…..well that’s a whole new adventure in itself!  Stay tuned!