Life’s been busy these days.  I feel like I’m always saying that…but then again, it’s always true! I had an interesting week at school last week.  I’ve always thought that the impromptu singing and dancing from the High School Musical movie franchise was totally contrived.  No one actually does that, right?  Well, I learned last week that people do, indeed, to that.

A TV station crew from KBS (Korean Broadcasting System) came to our school on Tuesday to do a feature piece.  This of course meant that the school had to do something special for the camera.  So they recorded my dance class (and interviewed me – in English and Korean!!), a few other “normal” classes, and then a bunch of the students performed a song and dance in the middle of the English lounge.  Well, I suppose it was still contrived, just like in HSM….but that doesn’t mean that people don’t do it!  It was a stressful day, full of class cancellations, additions, location changes, and the like, but in the end it was fun to watch the TV crew at work.

This week will be super busy.  I’ve got to stay at school every day until almost 11:00 pm, practicing for a dance that I’m performing with some students at the beginning of next week.  I’m fighting a cold, so hopefully I’ll be able to survive!!  I had a nice calm before the storm this weekend, though.  On Friday night, I went our for dinner and ice cream with my favorite co-worker, Ye-ji.  We had a nice chat, and it was lovely to just chill out and relax.

Then on Sunday myself, 2 other foreign English teachers – one from Canada, one from Hong Kong -, a Korean teacher, some Chinese friends from church, and some Korean students went out for a picnic after church (we’re such an international group! ;]).  After that, we took a bus for an hour or so to the beach.  It was actually the underwater tomb of the ancient Korean King Munmu, but you can’t get to the tomb – it just looks like a bunch of rocks in the water – so I’m just calling it a beach :).  We played in the sand, and climbed the rocks, and took lots of pictures.  I have a feeling that the wind and cold temperature had something to do with the cold I have today…but I’m still just trying to focus on how much fun we had! 🙂

And that’s my life these days.  I will be very happy when this week is over.  Please pray for energy and focus and health for me!  Many updates to come in the near future! 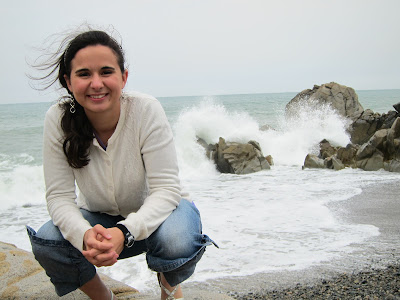