Well, my internship is over **sniff, sniff**. I had some interesting interactions with people on my last day….made for an unforgettable send-off. Whether that’s a good or bad thing, I’m not sure of :).

We had a big farewell lunch with all of the interns and mentors and grad students that we worked with this summer. That was fun – all of the interns went around and told what their favorite memory was this summer. Mine was a tie between Phantom of the Opera and the dance workshop…although I think that the workshop slightly edged out the Fox. It was rather bittersweet, because all of us knew, although no one said it, that the likelyhood that any of us would ever see each other again was slim to none. But it was a wonderful experience, and I am so so so glad I did it. When I think of how close I came to not taking the job, simply because I was scared of it, I shudder, and then thank God profusely for giving me the courage to take it.

On my way back from work for the last time, I saw a scary sight. A woman was stopped at a traffic light, facing the wrong way on a 1-way street. She was talking up a storm on her cell phone, totally oblivious to the world. Apparently she didn’t see the people turning onto her street, or honking at her, or the wall of cars that faced her at the other end of the intersection. I stopped and knocked on her window as I crossed and told her she was on a 1-way street; she pulled around after that, but I worry for the safety of others when drivers like her are on the road…

After I got back from work, I threw my bag in my car and hit the road, headed for my grandparents’ home in North Carolina. I only got turned around once, and quickly figured that out. When I got gas, I checked my oil, like always. A guy pulled up into the bay next to mine and asked if I needed help checking my oil. I’m pretty sure he was convinced that females are not capable of checking their own oil; he asked me 3 separate times if I needed help, even after I said no. Either that or he was just deaf… 🙂

Pa and Jan have taken me to some pretty awesome restaurants while I’ve been here….they have also, however, informed me that I write about food alot, so I’m going to restrain from describing what we ate; suffice if to say that it was very good :). On Thursday Pa took me to see Le Grand Cirque at the Palace Theater. It was incredible!! Two hours of non-stop, jawdropping acrobatics. Check it out here. I also got to see Grandma Dot (actually my great-grandmother, Jan’s mom). It was good to see her – she’s 90 years old now, and it’s been years since I’ve seen her. I’ve spent alot of my free time cleaning up their computer and making it usable again – installing more memory, deleting unused programs, running antivirus programs, downloading security updates, etc. They thank me profusely, but I don’t think they really get that I like to help them when I can – they’ve done so much for me. Plus, I like puttering around with computers, and don’t get to do it very often. Yes, I am a nerd, and proud of it, lol… 😀

On Friday, they decided to take me shopping for dance shoes, to replace the ones that broke. They wanted to pay me in some way for all of the work I had done on their computer (which, in the end, totaled to 2 virus scan, a defragmentation of the hard drive, installation of more ram, extensive cleanup of the programs on the computer, installation of a new printer, setting up iTunes on the laptop, setting up Pa’s mp3 player, plus a few more things). I told them that they didn’t have to – I enjoy working on computers, plus I appreciated the opportunity to help them. But they insisted….plus I get the feeling that they were also kinda looking for an excuse to be doting grandparents :). And, since I have a very difficult time arguing too vehemently against an offer of free dance shoes, shopping we went!

We caroused around the city for the better part of the day. I finally found not one, but 2 pairs! The first is a traditional dancing style, and very comfortable. The second, though, is not quite as traditional. I was so excited when I saw them, though!! I’ve always, always wanted a pair….it’s a pair of black spats!! I can’t wait to break them in! 😀

They’re not very good pictures, but I’ve uploaded pics of the shoes here: 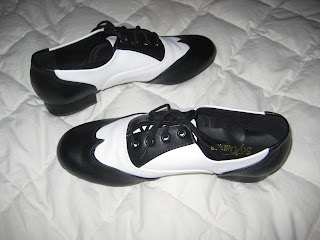 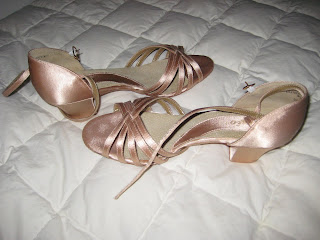 Jan went to bed early, but I stayed up late talking with Pa – we talked about church, telemarketers, life, death, homeschooling, serving in the army, and everything in between. It was alot of fun. He’s so interesting, and has such wonderful stories to tell. My brother’s been after him lately to write down his memories to pass onto the grandkids. He’s started doing that, and I really hope he follows through; I think it would be fascinating to read what he has to say. Plus, it’s important that young people remember that their grandparents were not always old, but have years and years of wisdom and experience they could pass on. But enough of my theoretical philosophizing…I have a long drive tomorrow, and I need to get some rest. Dear Pa and Jan, I know I’ve told you this in person, but since I know you’ll also be reading this blog, I can say it again….I love you so! Thank you again for a wonderful, wonderful week! It was soooo good to see you 🙂 🙂 :).