I have decided that a trip with Elizabeth can never occur without some sort of unexpected thing happening.  Jinju was insane, the Hallyu concert was convoluted, and now Andong, too, was no exception.  Or maybe it just comes with the territory of traveling in Korea, in general.  But whatever the reason, she’s so fun to travel with, it’s always enjoyable no matter what happens. So anyway, I did my homework and found a bus to Andong that left at 10:00 on Wednesday morning (I don’t have classes this week, so I’m doing alot of traveling).  To try to avoid sitting on the floor like we did to Jinju, we decided to get there early, around 9:00.  So we get to  the bus station – and there is no 10:00 bus.  The next one is at 11:40, almost 3 hours from now.  Yuck.  But we were all set to sit down and wait, when suddenly I remembered that the trains go to Andong, too!  I looked up the time table, and there was one leaving in 15 minutes.  So we rushed to a cab – Elizabeth following behind somewhat dubiously – went to the train station, and bought our tickets with 5 minutes to spare.  The spontanaeity was exhilarating :).  It was also the first real train ride I’ve ever been on, and I thoroughly enjoyed it.

Once in Andong, we met our friend Meghan at her house, and she played hostess for the rest of the day.  I’m completely competent to figure out travel plans by myself, but it was really nice NOT to have to do that for a while.  She lives in Andong, so she knew all the best places to go, and made sure to show us all of them.  It was great. 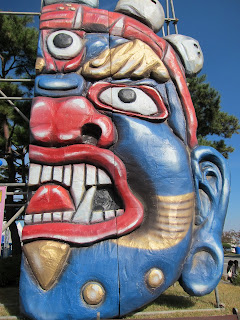 Our first stop was, of course, the maskdance festival, the reason why we had come.  We got yummy Turkish wraps (or maybe they were just wraps with turkey in them?  I’m not sure…) and walked around for a bit.  Elizabeth and I made our own masks with Hanji (Korean paper art) – I think they turned out pretty well, if I do say so myself.  While we were working, a woman from Mynamar came up and asked if she could interview us about the festival – they were trying to find out how to make it more foreigner-friendly.  I’m getting used to sticking out – random people saying “hello” and “I love you!” has become the norm – so it was no problem, and we just talked while we worked. 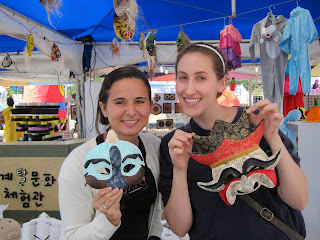 After making our masks, we watched a few performances.  The first one was a play, which I obviously didn’t understand.  But the second one was a dance, and that’s something that I DO understand.  There were 3 groups, from Thailand, the Phillipines, and Israel.  They were all soooo different.  Thailand was a very traditional thai dance; the Phillipines was a modern ballet; and Israel?  That was the trippiest, wierdest, closest thing to doing drugs that I’ve ever experienced.  That’s the extent of my ability to explain it.  Check out the pictures below. 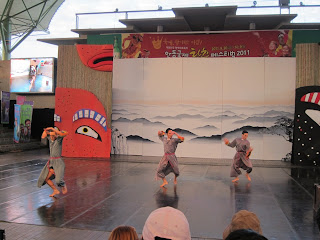 So after that, Meghan took us to one of her favorite places to eat (Italian, yummm).  There were children performing different acts as a part of the festival right outside the restaraunt, so we stopped and watched for a while.  We left when the baby bellydancers came out, though.  There’s something about seeing such young girls move their bodies like that that was really disturbing…I didn’t like it at all :(.

OK so, our day’s almost over, we’re in the apartment building heading to her place, and the man in the elevator starts talking to us in (very!) broken English.  Eventually we figured out that he’s seen Meghan around alot, and wants to talk to her about doing a homestay.  But since we can’t really talk to each other, he wanted us to come to his house (one floor up from ours) to talk to his children, who speak English.  We were all really uncomfortable and didn’t know what to do, but we reluctantly followed him.  I think we felt safety in numbers.  Even so, though, Elizabeth and I wouldn’t go in until we verified that there actually were, indeed, children inside.

But it turned out to be great.  We sat and talked with the kids for a while…tried to piece together some sort of Konglish with the parents, who don’t really speak English.  The mom told me my Korean was good, which made me happy :).  She made us tea and cut up an apple for us to munch on.  It was really nice – and the randomness of it all just made it even better, despite the initial awkwardness.  At the same time, though, it made me rather sad.  These people are wonderful, they live in a lovely apartment (Meghan’s apartment building is quite aptly named Lotte Castle), and they really want to do a homestay.  I, on the other hand, will start the process of looking for a new homestay next week – I talked to my program coordinator again while we were on the train to Andong, and he agree that things have gotten way out of hand, and I needed to move.  It just doesn’t seem fair….why can’t that wonderful family live in Gyeongju??  Or I live in Andong??  **sigh**

But anyway, this was a good trip, so I shall move on from my pity party.  Meghan’s parents had reserved a room for us in a hotel, so after we got to her house we said our goodbyes and they took us to the hotel.  The hotel was really nice, and only a 5-minute walk from the train station.  Elizabeth and I were super giddy.  Seriously.  Check out our photos.  This is what happens when you get 2 girls together after a long, happy day :). 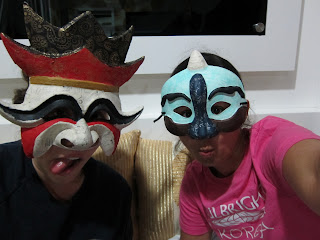