I would like to introduce you to the wonder, the joy, the incredible awesomeness that is….pepero day.  I mentioned in my last post that I made some pepero sticks with my host sister a few days ago, but I have yet to talk about the actual event!  I would be highly remiss in my duties as a blogger if I did not do that, so let me remedy the situation now.Pepero day, 11-11-11, was last Friday.  It’s supposed to be a day when students give pepero to teachers that they appreciate.  However, there were 2 things working against me – A) I’m the new teacher, the low man on the totem pole, as it were, and B) I had been told that pepero day wasn’t really celebrated by students in my school, so I wasn’t really expecting that much.  Most of the day went by with my assumptions being confirmed – by 3:30 or so, I had received 1 box of store-bought pepero, and that was it.  I was ok with that, no biggie.

But then it started coming.  And coming.  And coming.  By the end of the day, I had 9 boxes of store-bought pepero, and 4 bags of homemade stuff.  But the best part for me was the notes.  I got some of the best notes ever – the kind of notes that a teacher dreams of getting.  I’ve posted pictures of all of them here, but my favorite one is the one with the butterfly on the paper – she called me her favorite teacher, and thanked me for the work that I do in class.  Needless to say, I was on cloud nine, and her note is one that I will probably keep for the rest of my life.

I had so many wonderful interactions with students on Friday.  It was also dance class day, so that’s always fun.  I met a senior who asked me to help her with a French essay – I’m not sure how helpful I’ll be with that, but her English was really good, and she was bright and ambitious, and so we exchanged email addresses and hopefully we’ll be able to keep in touch.  Also, if you haven’t checked out the school blog lately, you should take a look at it!  Students have started writing, I’m showcasing some of their work, and overall it’s super exciting!!  🙂 http://seondeokhighschool.blogspot.com/ 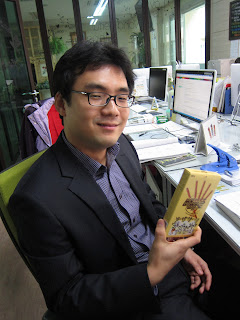 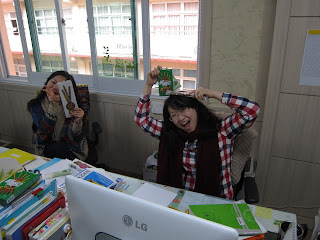 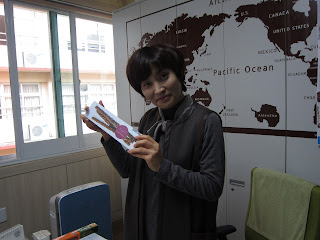 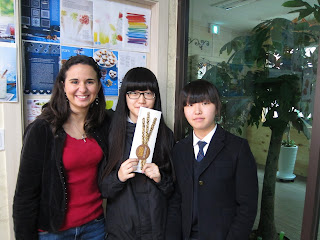 So I’ve been with my new host family less than a week, and already I’m dreading the time when I’ll eventually have to move out.  They are such a joy to live with.  I’ve made more memories with them in 5 days than I did in 7 weeks with my old family.  The night I moved in, Insuk (my host sister) and I went on a walk around our neighborhood.  We ran into some of her friends, and after walking around for a while, we decided to go to a coffee shop and play Jenga (that was my idea, actually….it was really cool to be able to show something new to Insuk about the neighborhood that she’s lived in her entire life :]).Then last night, one of her friends came over and we all made Peperos (basically a long straight pretzel dipped in chocolate and decorated with sprinkles and such) together.  Tomorrow – 11/11 – is aptly named Pepero day, so they wanted to make some to give to their teachers and friends.  It was hilarity the entire night.  First of all, Insuk comes in all in a tither, totally flipping out – she had just stepped up to her ankles in wet cement.  I felt bad for her, but at the same time her reaction was absolutely hilarious.  I couldn’t help but laugh…and then I helped her clean up :).  So anyway, after she got all of the cement out of her clothes, we finally got started on the Pepero – step 1, melt the chocolate.  I’m not sure how they did this, but their first attempt at melting it ended up in a gooey, burnt mess.

Around that time host papa came home, and he was all excited because the wireless router that he had bought for me had just come in.  And apparently, it was absolutely imperative that it be installed right now – actually, to be more specific, that I install it right now.  So he helped me a little bit, and we eventually figured it out, but I was left with a newfound appreciation for troubleshooting technology in a foreign language, lol.  All those people in India get a bad rap….    Anyway, right after we finished I had to leave for my Bible study – by the time I came back host momma had come home and taught the girls how to properly melt chocolate, and they had moved onto decorating – with a pile of failed attempts at decorating already on the table.  But I can’t make fun of them too much for that – the failures still tasted just as good!  Made for some yummy snack later on….

Tonight, my host mother brought home fried chicken (I tell you what, Korea sure does know how to do fried chicken, it’s sooo tasty!) along with about 20 pounds of spinach leaves.  So Insuk and I helped her lug it all the way up to our apartment – we live on the fifth floor and there’s no elevator.  I’m still trying to figure out what she’s planning on doing with all of that spinach…

I also had a personal victory today.  I’ve been putting off getting a haircut for months now.  I didn’t want to make a Korean friend come with me, but I was scared to go alone – I had heard too many horror stories of foreigners getting awful haircuts because they can’t communicate well and the Korean hairdresser don’t know what to do with their strange hair texture.  But today I didn’t have class, and so I decided that I also didn’t have an excuse anymore.  I looked  up how to tell them what I wanted, and spent a while memorizing it, and then bit the bullet and went into a hair salon near my house.  I left with an $8 haircut that looks amazing, 2 bottles of hair stuff given as a gift, and a new Korean friend.  I was so happy…. 🙂

Towards the end of my stay with the last family, I was REALLY struggling with my decision to move.  It seemed like such a drastic decision – was it really that bad?  Maybe it was my fault…would the new one be any better?  The epic drama on moving day did nothing to decrease my anxiety – it started with my host sister (Songi) coming into my room in the middle of the night sobbing because she had just found out that I was leaving, was punctuated with my co-teacher crying from stress at school, and ended with even my old host mother tearing up.  And all of that left one confused, emotionally drained, and very unsure little Lauren.

But I have no misgivings anymore.  Aside from the fact that this family actually feeds me (ah!  We already ate dinner and momma just asked me if I was still hungry!  I feel so loved!!!), they also just make me feel welcome.  No more yelling at me or around me.  No more ignoring me, either – I’m not sure which one is worse.  No more letting me fend for myself without ever asking me if I’m ok.  No more drastic mood swings where I am left wondering what the heck just happened.  I don’t think even I realized how much stress I was harboring until I was removed from the situation.  This new family doesn’t just allow me to live in their home – they treat like part of the family.  It’s absolutely incredible the difference that that makes.  And to make things even better, Songi (the only person from my old home that I’m going to miss) and I are still on good terms.  We’re planning on meeting up next week, after her big senior exam is over :).

Aside from the family…I even like where I live.  I really liked the location of where I used to live, and was struggling with leaving that, too.  And during the day and a half that I lived with my friend, I realized that that was a legitimate concern.  She lives on the other side of town, and I just felt so completely lost while I was there.  I didn’t know where anything was – it was like my very first few days in Gyeongju all over again.  But my new homestay is in the same neighborhood as my old one.  They’re about a ten minute walk from each other, but all of my old haunts are still easily accessible.  I feel so blessed that God looks out for even my smallest worries.  Really, where I live is a silly concern – I would have figured out a new neighborhood, too – but God allowed me to stay where I knew, while also giving me a family that welcomed me.  So here’s to making many wonderful new memories in the next 8 months! 🙂