Whew!  Where do I start??  This past week has been an absolute whirlwind.  I did have some fun cultural activities.  Art, a Fulbrighter from Pohang, came for dinner tonight.  So we found a cute little hole-in-the-wall Italian restaurant, and then walked around downtown some – even ran into one of my fellow Gyeongju-ites.  I went to listen to a youth orchestra on Friday night – that was cool.  They were very good, and the music was incredibly soothing to my tired soul.  After that, a bunch of foreigners got together and shot of some fireworks – I really enjoyed that.  They certainly didn’t compare to Busan, but it was still fun.  I taught my students the electric slide during dance class.  As I sat there, watching 40+ little Korean students and teachers doing the electric slide, all I could think was, “cultural ambassadorship for the win.” 😀  It was epic, lol. 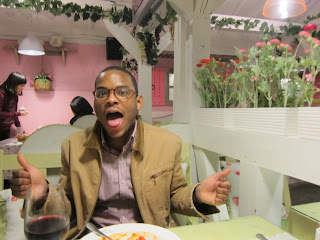 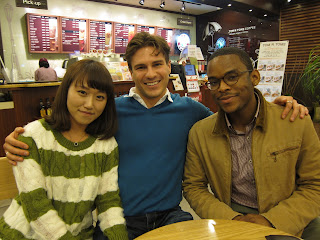 But the biggest issue in my life this past week, by far, has been the subject of the homestay.  If you read my blog at all, you’ll know that I’ve had lots of difficulties with the host family these past few months.  Well, it all came to a head this week.  Amid a flurry of phone calls and tears from the host sister, co-teacher, and even the host mother, I was told on Wednesday that I would be moving – on Thursday.  So I rushed home that night to pack, and by Thursday evening I was in my Korean friend’s home.  However, to make an epically long story somewhat shorter, because it was not a full Korean home (her husband is Canadian) that could not be my permanent home.  So on Saturday, I moved again – into my third home of the week, and hopefully my last one of the year.  Needless to say, all I did after church on Sunday was sleep – I was so emotionally drained from everything that had happened that I didn’t have the energy to do anything.

I was hesitant to get too excited about my host family.  They seem pretty cool, but then my last host family seemed pretty cool at first, too.  But gradually I think I’m being convinced that this situation will be different.  My new host sister,  Insuk, is really outgoing and talks to me a lot (when she’s not in school, lol).  Even my host parents, although they don’t speak any English, are trying really hard.

I got home today and my host parents fed me (a definite improvement from the last home) and complimented me on my Korean handwriting and told me to take lots of showers because my face is breaking out from stress (I know that means that they care, but I could do without the dermatological scrutiny, lol) and looked at pictures of my family in the states and informed me that the little ones simply must come and visit them – regardless of the price of airfare.  I feel more welcome here after just 2 days than I ever did in my old home.  I brought some famous Gyeongju bread home for them tonight, and we sat down and ate it together with banana milk and orange juice.  It was nice to spend some time with them :).
So my mom (my real mom) said that if I’m exhausted for the next week or so, that’s a good thing, because it means my defenses have been let down and I feel like I can finally relax at home.  If she’s right, then I’m very relaxed, indeed – I’m completely, utterly exhausted.  But I’m happier and feel less stressed than I’ve been in a long time.  So that’s a good thing, I guess :).  But for now, I need to get some sleep.  I’ll have some pictures from school up soon!

Well, another week has flown by.  Have you ever noticed that the days so often seem to crawl, but then the months and years fly by?  How does that work??  I’ve been sick this whole week (I think I got sick at the EXPO last weekend) and the hours have passed sooo slowly…but all of a sudden, it’s Friday!

Dr. Cho rescheduled our dinner from last week.  He called me and said “we will eat dinner together on Tuesday night.”  I wasn’t really given an option, lol, and so dinner was duly eaten with him on Tuesday night.  I was glad that no more last-minute teacher’s dinners were scheduled; canceling twice in less than a week would have been really awkward :(.

But ya, he took myself, and Anthony (another English teacher; he leads worship at church), and the pastor and his whole family (4 kids under the age of 5!!) out to dinner at a really ritzy upscale restaurant.  The Mundys came a little later than we did, so Dr. Cho and Anthony and I went for a walk around the lagoon that borders the restaurant.  The water was sparkling, there were swan boats floating gently on the lake, and the sunset was breathtaking.  I was kicking myself that I had forgotten my camera :(.  At dinner the kids were a little loud and distracting at times, but the food was wonderful, and the company excellent, and overall I had a lovely time.

Wednesday night I went on an excursion with Elizabeth to Pohang, about 30 minutes away by bus.  After going to Pohang a few weeks ago, I felt like an old hand at the buses here, lol :).  So I was able to show her the ropes, and we spent the afternoon in Pohang.  Chuseok, the Korean version of Thanksgiving, is coming up this weekend, and it’s a common gift-giving holiday.  So we went to find gifts for our host families and co-teachers.  It was so hard!!  I love giving gifts, but it’s really hard to give a thoughtful gift when you don’t know the person to whom you’re giving the gift!!  But anyway, we found some small gifts – I settled on nuts all-around – and headed back to Gyeongju.  But it was worth it – I gave my presents on Thursday, and then on Friday I was showered by a flood of little gifts from my co-teachers.  I felt so loved :).

I came back from Pohang and found my host sister, Areum, in the middle of a mess in the kitchen.  She was trying to make fortune cookies, but had no clue what to do – had never even used their oven before!  She looked at me and was like, “Lauren…help me!”  So of course, I did, and we made homemade fortune cookies for the rest of the night.  It was fun :). 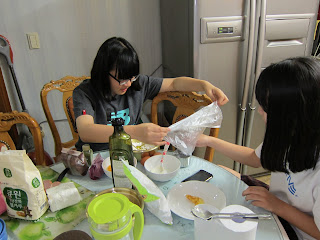 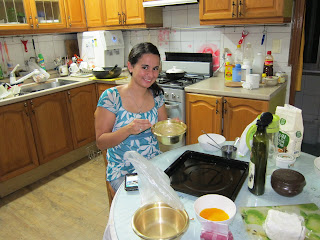 Thursday was an adventure, for sure.  The owner of my school, Dr. Choi, decided that he wanted to take Elizabeth and myself out for lunch.  It was really nice – he took us to a traditional Korean restaurant, and we had a huge spread of dishes, and it really was a lovely meal.  But it also made me 15 minutes late for my class when I got back.  Instead of letting the sub just teach the entire class, I rushed up as soon as I got back and finished the last 30 minutes.  It made the class a little stressful, because I hadn’t really had time to prepare, but I’m glad I did it.  I love my girls, I want to spend as much time teaching them as I can :).  It sure boosted my ego, too, when I showed up to class….they gave me a standing ovation.  This is why I love teaching… <3 🙂 Then Thursday night was salsa night!  I dragged Anthony along with me to go dancing – he told me that “he loves to dance and knows how to move his hips, but not much more than that ^_^.”  Well, that was enough for me, and so Thursday night found us rendezvousing on our bikes to head to the dance together.  We left early and went to a little Russian restaurant – the same one, in fact, that I went to on my very first excursion on my own into Gyeongju.  We were early to the dance, so we just walked around for a bit.  He showed me some popular places, helped me connect some of the dots between the places that I know and their relation to each other, told me stories about the city.  It was fun.

At the dance, I was impressed with how quickly he picked things up.  I wish I had known more moves to teach him, because he is a fast learner.  But one of the Koreans there kind of made us his special project throughout the night, so I think Anthony was still able to learn quite a bit.  The club we went to seems to have several line dances that they do every night.  He picked them up almost instantly, while I was left fumbling along in the dust, lol.  But it was still fun.  Dances are always better when you have a friend to share the joy with :). 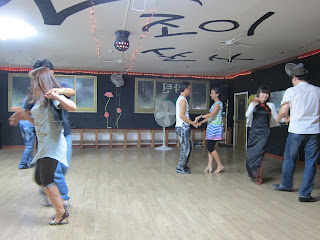 Oh, 2 more big events happened Thursday night!  First, I got my first proposition from a Korean man.  One of the guys at the dance knew a little English, so he was asking me about myself.  “How old are you?” he asked.  “I’m 21,” I said.  “Oh, wow, I’m 37.  Do you want a Korean boyfriend?  Koreans are alot of fun.  What’s your phone number?”  Don’t worry, I didn’t give him my number, but I found it rather amusing, nonetheless.  The other event was a little disconcerting.  As Anthony and I were heading home, a man crashed on his bike right near us, in the middle of the road.  We ran over and picked up his bike for him, but he wasn’t moving.  He just lay there in the middle of the road.  I couldn’t tell if he was drunk or perhaps mentally disabled.  But he didn’t really seem to want us to help him.  So after hanging around for a few minutes, we pulled his bike out of the road, said a prayer for him, and continued on our way.  I’m still not sure if we did the right thing.  I just didn’t know what to do…it was very disconcerting :(.

So that’s my life right now!  It’s starting to become the normal routine…but when I really look at it, there’s nothing normal about this life!  You know that you’re living a rather unique life when ritzy meals, homemade fortunes, random propositions and old men sitting in the street has become the norm :).