Whew!  What a whirlwind weekend I’ve had!!  I’m grateful for the opportunities to see so many things, but MAN I’m looking forward to not traveling every weekend!  I’m sooo tired….but let’s start at the beginning, shall we?Last week was fairly uneventful.  Classes and study went by as usual, with nothing particularly exciting to report.  The one exception to that would be Wednesday.  A bee got into the classroom in the middle of my lesson, and I quickly realized that ignoring it, my preferred choice, was not an option.  The girls were screaming and running away from it, and there was absolutely no way I was going to get them to pay attention to the lesson.  So I intended to just shoo it out of the classroom, but he wasn’t cooperating and time was a-wasting.  So I must admit, I was forced to sacrifice the poor bee in the name of education.  The response I got from my girls, however, was quite amusing.  I got a standing ovation, a chorus of “We love you, teacher!” and even “Teacher, you’re my hero!” a few times.  Almost makes me want to let bees run loose in the classroom just so I can kill them, lol…

The other excitement on Wednesday happened after school.  Songi, my host sister, had a test, so she got out of school early.  She actually asked me to walk home with her – at which I jumped at the opportunity – and then I suggested that we go to the Rice Cake and Wine Festival, which was happening in Gyeongju at the time.  She agreed, and we spent the whole afternoon hanging out together at the festival, even making rice cakes and eating dinner together.  With all of the stress and tension that’s been happening in my homestay lately, it was so wonderful to just be able to enjoy her company for a while.

I also have a newfound respect for her.  On our way back we decided to take a taxi, and long story short he basically totally ripped us off.  He went the ABSOLUTE longest way back home that he could, and our fare was about 3 times longer than it should have been.  Well, I knew what was going on but wasn’t really able to do anything about it.  But Songi?  She would have none of it.  First she called her mother (while still in the taxi) and starts complaining about how the taxi driver’s ripping us off, so that he could hear her.  Then she hung up and starting laying into him.  Then she called the taxi company and complained about him to them.  And THEN, when we finally got out of the cab, she warned the people getting in after us to find a different taxi!  This coming from the girl who’s normally so shy she won’t even let me put the camera on her face when we skype with friends back home!  I was so proud of her!!!!

So anyway, that was my week’s worth of excitement…now on to the weekend!  On Friday night, after my dance class, I went up to Seoul on the KTX (Korea’s super-fast bullet train) with my friend Harry.  THAT was an adventure before we even got to the train station!  My school took me out for dinner after dance class, but I had to leave early to make my train, so I took a taxi back home….and then I realized that I had forgotten my credit cards at school, so I had to take a taxi there to get them, and then another one back home; I got into my fourth taxi of the night to FINALLY head to the KTX, but then we had to turn around again because Harry thought he had forgotten something (which it turns out that he hadn’t).  So by the time my FIFTH taxi of the night brought me to the KTX station, we had to run to make our train – we did make it, but it was tight!  Not the way I would have wanted my weekend to start, but I guess it makes for a good story, right? 🙂 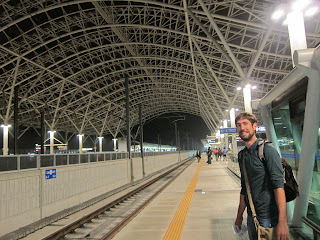 So Saturday we spent milling around Seoul.  There was an expat festival that we went to in the morning.  I met some cool people there, but the festival was all outside and they weren’t prepared to handle the rain that came, so we left a little bit after lunch.  We were contemplating going to Lotte World, which is like the Disney World of Korea, but the torrential rains kind of killed those plans.  So instead, we decided to go see…Cats!  Yes, the award-winning dancing and singing extravaganza has made it all the way to Korea!  And, while I’m sure some of the brilliance was lost on me, since it was all in Korean, I was still definitely able to appreciate the fabulous sets, talented singers, and incredible dancing.  Add to the mix smart phones, with which we could look up the synopsis of Cats during intermission, and we got along just fine :). 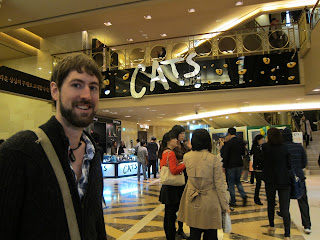 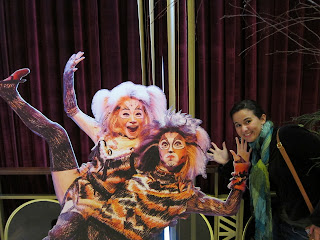 Our evening was spent in the rain in Itaewon, the foreign district in Seoul.  We went to a Jordanian restaurant called Petra Palace and got hummus and falafel for dinner, and I was super happy :). Sunday morning we found an early English speaking church service, and went there together before we parted ways – he went back to Gyeongju, and I went up…to Hwacheon!!

My dear friend Sarah’s 21st birthday was this weekend.  And, it just so happened that I don’t have school this week, and I was already in Seoul, so all I had to do was go a little farther north and I was there!  She had a party on Sunday night with her host family, Leora’s host family, her co-teacher, and Adam, another Fulbrighter.  I stayed with her in her homestay both Sunday and Monday night, and went to school with them on Monday.  I got to observe some of both her and Leora’s classes, as well as be there for the party that Sarah’s co-teachers threw for her.  Her family took me on a walk around the town on Sunday night, and out for dinner on Monday night.  They were so amazingly loving and wonderful…her host brother, Eun-chan, who speaks near perfect English, took a liking to me.  We when on a walk after he finished school on Monday, while we were waiting for Sarah and Leora to finish.  Her host sister, Eun-song, is in high school.  So I didn’t get to see as much of her, but she’s super sweet (and also speaks English really well), so when she was around we had fun.  Her parents don’t speak much English, but they try, and you don’t have to speak the same language to see the love exuding from their pores.  They are all Christians, so I even got to read the Bible with them both mornings that I was there.  It’s a daily tradition that they have now – Sarah and the kids take turns reading, first in English, then in Korean.  It was so cool to be able to share our love of Jesus together :).

It was so hard to leave them, and the ride back to Gyeongju was very long, but I’m sooo glad that I went up there.  Meeting these wonderful people, getting to see Sarah and Leora and Adam, seeing what a real homestay family should be like…it was just so refreshing!  But now, I fear that I shall have to cut this short – this blog is getting long, and lessons for next week must me made!  I’m sure you’ll hear from me again soon… 🙂  Check out pictures from Hwacheon below! 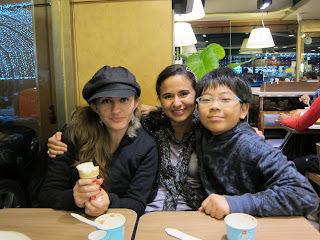 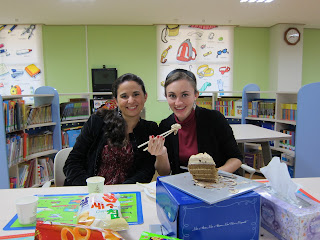