There have been a lot of goodbyes in my life lately.  At church, at Bible study, at school, at teachers dinners and meetings, even in neighboring cities….it’s been a very sad week for me.  But I keep reminding myself that this is really a good thing.  I’ve been in Korea for over a year now.  I’ve invested a large percentage of my life into this place.  I’ve laughed, I’ve cried, I’ve poured out my heart and life and soul into this country.  The goodbyes are bittersweet, to be sure.  But how much more tragic would it be if I had lived here for an entire year, and WASN’T sad to be leaving?  How much sadder would it be if I had spent so much time here, but hadn’t plugged into the people here at all?  If I had just considered this year a “pause” in my real life, and just spent all of my time here looking to the future, waiting until I could get back to where I was comfortable?

The goodbyes are sad, of course.  I can’t say that I’m HAPPY that I’m leaving these people and places that I’ve come to love so dearly.  But I AM happy to be so, so blessed.  I am happy to have made wonderful friends here, to have such precious experiences and memories from the past year.  I am happy that a part of my heart has been embedded into the people and culture of Korea….for the rest of my life.  And, at the same time, I am happy to be returning to America.  Because I know that I have just as many blessings waiting for me back in the states, as I have in Korea that I am leaving.

So this blog is just a collection of photos, and also a short video, of some of my favorite goodbyes this week.  Captions explaining the pictures will be below the photos.  Enjoy! 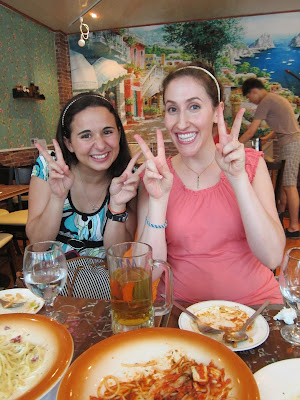 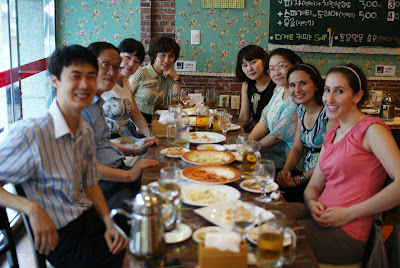 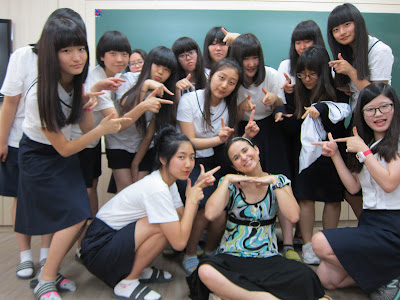 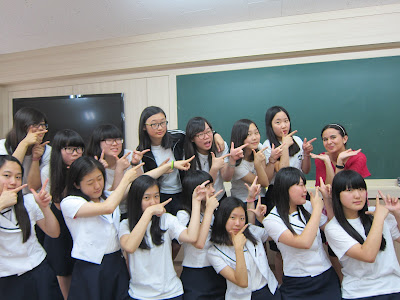 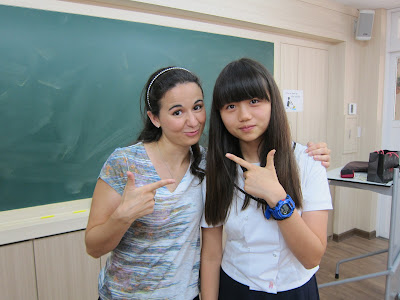 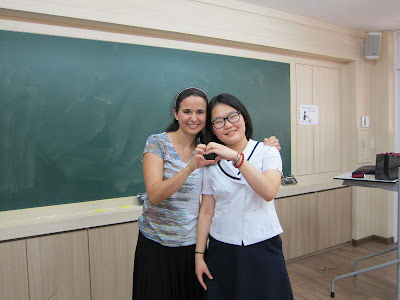 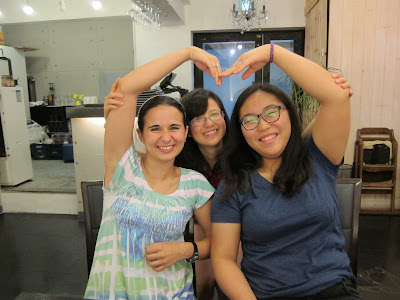 Check out Lin’s reaction below when I said happy birthday to her in Chinese!  It’s only about 19 seconds, but soooo worth watching!  Priceless!! 🙂 🙂 🙂 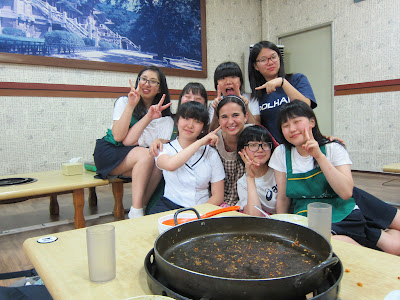 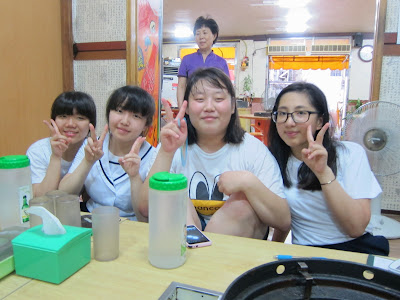 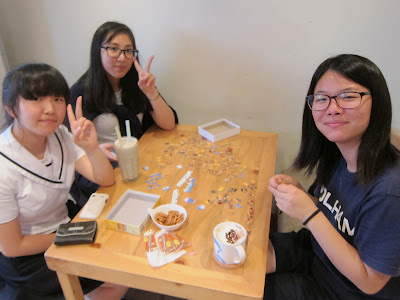 Well, I found the Korean classes.  And the salsa club.  And the frisbee game.  But let’s start at the beginning….
Thursday night I set out armed with a picture of a hand-drawn map to guide me to the Korean lessons.  It was almost good enough.  I made it to the intersection that the building was on, but the building itself was tucked away and rather hidden, so in the end.  I had to call the girl who had given me the directions to help me.  But I got there, that’s what matters, right?? 🙂  The classes are taught by a Korean, as kind of a language exchange thing – she teaches us Korean every week, we take turns teaching her English every week.  The classes are super basic – way beyond my ability, and that’s saying something, lol – but I think I’m going to keep going, anyway.  It’s always helpful to have someone I can ask questions of, and plus I want to make a Korean friend.  Plus it’s something to do to get out of the house…..
So right after class, I headed over to the dance.  I did not even have a hand-drawn map to help me find this one, and I never would have stumbled on it if one of the other girls in class, Martene, hadn’t gone before and offered to show me where it was.  Through a shady alley, up two flights of windy stairs, around a few corners, and behind a tiny doorway….we found it.  But boy, once I got there, I SOOO did not want to go in.  I didn’t realize how intimidating it would be until I was standing in the doorway.  But by then, it was too late.  They had spotted me and were waving me in.  For all of the crazy or adventurous things I’ve done in my life….I’d have to say that stepping into that roomful of Koreans had to be one of the bravest things I’ve ever done.
But it was so worth it.  They were in the middle of a lesson when I got there, so I jumped right in.  Even though I couldn’t understand the instructions, I just followed what all of the other follows were doing and got along pretty well.  It was also a pretty basic lesson, so the fact that I was familiar with the basics helped alot.  After the lesson, the free dancing started.  Even though most of them couldn’t speak any English at all, everyone was really nice.  I don’t think a single song went by without someone asking me to dance.  It helped that there were more men than women – a welcome change from my college, which is dominated by 75% females, so you can imagine how lopsided the ratios are at the dances.  A few times as I was dancing, I was struck by the fact that I was an American dancing to latin music with a bunch of Asians in South Korea.  I don’t know why, but I found that quite amusing :).  But ya, I had alot of fun, and I’m definitely going to become a regular.  It’s not West Coast Swing but hey, I’ll take what I can get! 🙂
Friday night I was supposed to have dinner with Mr. Cho, from my church – he was going to pick me up at 5:30.  Well, at 3:30, one of my co-teachers informed me that all of the English teachers were going out to eat dinner tonight, and that I would be eating with them.  It was not an option.  So, I had to cancel on Mr. Cho.  I was very disappointed :(.  I suppose it’s something I’ll have to get used to, though…in Korea, plans are made as last-minute as possible, and they tend to change even later than that.  So I called Mr. Cho, and regretfully backed out, and went to dinner with my teachers.  But it turned out alright in the end – Mr. Cho rescheduled, and I had a great time with my teachers.  They’ve decided that I’m going to perform a dance for the upcoming school talent show, and also that I’m going to teach all of them how to dance.  I’m more than a little worried, lol.  For such notoriously polite people, Koreans sure are good at getting their way when they want it… 🙂
But anyway, the reason we all went out for dinner on Friday night was because that was the first night we could.  Apparently they had wanted to take me out the first week I got here, but they were all so busy getting the new English building ready that they didn’t have time.  Friday afternoon was the ribbon-cutting ceremony, and so Friday evening everyone could finally relax.  I actually got to hold one end of the ribbon – it was fun.  I was glad when it was over, though – even though I didn’t really understand most of what was going on, everyone else was very tightly would, which made me nervous, too.  Hopefully next week will gain some semblance of normalcy to it…

Saturday had some crazy weather going on in Gyeongju.  There was a big storm or something on the coast, and so we had gusting winds and pelting rain all day.  In the middle of it, I decided to go on a bike ride.  Riding against the wind and rain – and then playing 3 hours of Frisbee – left me exhausted by the end of the day.  By the time I made it home, it was dinnertime, and there was apparently a mini family-reunion of sorts planned at my house.  So I got to meet all of my Korean cousins and aunts and uncles, and then after they left my host sister insisted on a Spanish tutorial lesson…by the time I finally slipped into bed, I was falling asleep on my feet.  But it was a good tired, a day well-spent.
Sunday I went to church again.  Brought a few new friends with me.  After I got home, my host family took me to the International Expo.  It’s a huge cultural fair / expo thingy that tours around Korea – it only makes it to Gyeongju once every three years.  There were lots of music performances, dances, plays, a food court, traditional artwork, kiddy crafts, the whole shebang…it was a blast :).
Well, tomorrow’s another school day.  I’ve gotta go work on my lesson plans for this week.  The Lord is good.  I love you all!!!