Every now and then, you meet someone with whom you immediately click.  Someone with whom you can share everything with, and no matter how many miles or months may separate you, as soon as you see them again you can immediately pick things back up where they were left off.  Many people only have one or two friends like this in a lifetime.  But I’ve been blessed with several; although they’re scattered all over the world, I’ve no doubt that they will be in my life for a very long time.What’s more, I actually got to see one of them last week!  Rachel, one of my roommates in college, had the nerve to get married and go off to Oregon to go to optometry school.  But I suppose I can’t get upset, since I left her for Korea, haha.  It had been a while since I saw her, and I was blessed with a fantastic deal on the flight, so after I finished up my finals, I headed out west to pay a visit.

I must admit…I don’t think I could ever live in Oregon (**knock on wood**).  The fog and creeping chill is something that I’m not used to, and I imagine would have a very hard time acclimating myself to.  But nasty weather is easily overlooked for a few days, especially when you’re with such lovely people! 🙂

Rachel still had to take a final the first day that I arrived, so Ryan and Seth (an old friend of theirs and also their housemate) took it upon themselves to entertain me while she was taking her test.  We went to a Sherlock Holmes exhibit at a hands-on science museum in Portland.  It was really excellently done.  They had some artifacts from the time period on display, as well as a lot of biographical information about the author, Arthur Conan Doyle (did you know that he was an army medic?  The character of Watson is modeled after himself).  There was even a recreation of Sherlock’s living room!  But after that, it got even cooler.  They had recreated a “crime scene” in the exhibit hall.  We had to go through the clues and compare the evidence to the official police theory, and see if they were right or not.  Eventually we cracked the case!  The police had it all wrong :).  It really was a fantastically done exhibit…I thoroughly enjoyed it.

The next day, Ryan and Rachel and I went on a walking tour of Portland.  There’s an app called Stray Boots Tours that you can get that sends you on a scavenger hunt around the city, so we bought it and followed the clues.  I felt like I was on the Amazing Race – actually with both the Sherlock Holmes exhibition and the Stray Boots tour, but particularly the walking tour.  I had to remind myself several times that there was no need to rush, we were not going to be eliminated if we came in last.  In fact, between the clues, scavenger hunts, and trying lots of new things – from homemade beer to lockpicking driving super fast cars to videogames – the entire weekend felt somewhat like a tamer version of the Amazing Race, haha :).  They were definitely my kinds of activities, though!

The rest of the week was marked by board games, an introduction to the video game Portal (every level is basically solving a series of puzzles; I’m not a video gamer, but that one was pretty darn fun), seeing Rachel’s campus and meeting her friends, and oh yeah…a Tesla test drive.  Teslas, for those who may not know, are premium fully electric vehicles (they start around $70,000 and go up from there).  And they are gorgeous.  Ryan arranged for Rachel and I to have a test drive while I was there.  Oh my word.  It was like a dream.  I’ve never really had car envy, always been perfectly happy with my beat up little Subaru; but I must admit, car envy may have reared its ugly head during that test drive :).

It goes without saying that the week flew by all too quickly.  I’m so grateful to have been able to go, and I missed them even before I boarded the plane back to Atlanta.  No time to mourn their absence, though…it’s time to get geared up for Christmas!  Only 3 more days!! 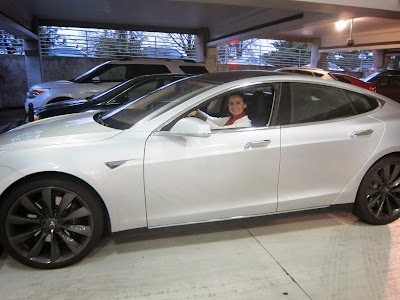