There are several stages of culture shock when  living in a foreign country for an extended period of time that are pretty generally accepted.  The first stage is the honeymoon stage, when everything is new and exciting and exotic.  After that comes withdrawal and depression, when everything is hard and overwhelming and nothing seems exciting anymore, just difficult.  All you can think of are the days when you understood everything around you and always knew what you were eating.  My honeymoon stage lasted probably all of orientation and maybe the first day or two of living in Gyeongju.  But after that, the second stage hit me hard and fast.  No matter what I did, no matter how hard I tried, I couldn’t do anything right, couldn’t understand anything.  It’s been like that for four long weeks.

But the third phase is assimilation, when you finally come to terms with the fact that you won’t be able to understand everything that’s happening around you, and that’s ok.  You’ve begun to find your own niche, regardless of the cultural differences.  I think that I’ve finally embarked on phase 3.  This has been a week of assimilation, niche-finding, and friend-making.

Over Chuseok, one of my adopted uncles had given Songi (my host sister) 50,000 won (roughly $50) to buy something for me.  So on Tuesday afternoon, Songi and her best friend took me shopping!  It was the first time that I had really hung out with Koreans outside of school or the homestay, and it was a blast.  They wouldn’t let me buy anything for them while we were shopping, so I insisted on taking them out to ice cream after.  Then we went to a norebang (Korean karaoke) – in the middle of the day!  It was kinda weird, but fun.  After that, we took sticker pictures!  Korea is famous for these – they’re like photobooths in America, except after you take the pictures you have to decorate them with stickers and cutesy designs before they are printed.  The place we went to was a tiny little hole-in-the-wall in which all of the signs weren’t even in Korean – intimidating enough – but rather, Chinese characters.  I would have never ever stepped foot in that place by myself, but it was alot of fun.

Thursday night was salsa night, but I didn’t go this week.  I was so tired, but I didn’t really want to stay in the house all night, so I was kind of looking for an excuse to do something other than salsa.  Well, lo and behold, I got what I wanted!  I got a message from another English teacher, Jennifer, who said that she was looking to make some more girlfriends, and would I be interested in sometime meeting up with her?  I said yes, and so we met up later that night for tea – we both got green tea lattes, yummm :).  Of course, neither of us thought to get each others’ numbers, and so we had a rather hard time finding each other at the tea shop, but we eventually figured it out – life in Korea, always an adventure!  The shop that we went to had some games in it, so we played Jenga while we talked.  We actually ran out of moves!  I’ve never seen a Jenga game come to a draw….I didn’t know what to do, lol…  But I had a really nice time.  It was good to get out of the house and spend some time with another girl.

That brings me to Friday – the big day.  So I had told my English teachers when I got here that I loved to dance.  Well, to them, that meant I would love to teach a dance class.  Oh, and just by coincidence, my principle studied danced in college.  The foreign teacher and the school principle dancing – publicity photoshoot match made in Heaven!  Oh, it gets better.  Not only did my co-teachers decide that I would teach a dance class, but they decided that it would be open to all of the students.  All 700 of them.  And their parents.  And all of the teachers.  And heck, while we’re at it, why not just invite the entire city of Gyeongju? (I’m not being facetious….they did just that)

On Thursday afternoon I had a photo shoot with my principle.  It was really awkward because, although he dances, he doesn’t speak English, so I didn’t know what kinds of dances he knew.  So I just kind of stood there and let him take a position, and then I arranged myself accordingly.  By Thursday night, our picture, accompanied with a flyer on my wonderful new dance class – was the new home page of the school website.  I’m not kidding.

So Friday evening comes around (it’s a 6:00 pm class), and I’m a nervous wreck.  I had no idea what to expect – not even a clue as to how many people would show up.  Well, I got my answer soon enough.  Forty-two students, plus about ten teachers, came to learn basic merengue.  Thursday afternoon I had sent a message to Anthony, asking if he would help me teach.  He agreed, and I am eternally indebted to him.  It was so nice to have a friendly face, a sense of solidity next to me in the craziness of the class.  And of course, all of the girls loved him :D.  At the end of the lesson, they asked us to do a demo – I really think that they believe that I’m far better than I actually am, but they enjoyed it.  After Anthony and I danced, we brought in some of the teachers and then danced with them.  The students really liked that.  It was really hard trying to teach over 50-something giggling high school girls, but it was worth it.  I had a blast :). 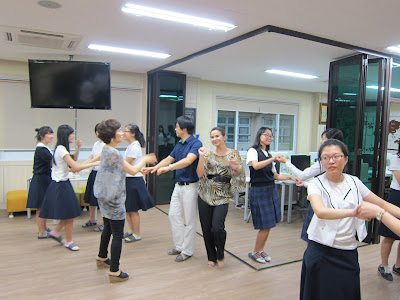 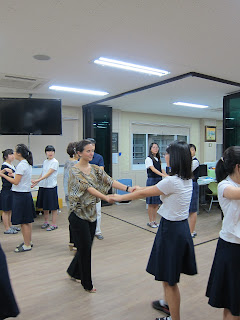 After dance class, Anthony and I went to get something to eat.  I had biked to school that morning, while he had taken a taxi, ergo – 2 people on a bike!  I had never done that before.  It took a while to get the hang of it, and we had a couple of spills, but we caught on pretty quickly.  I felt like such a local :D.  He took me to this tiny little Japanese restaurant in the center of downtown.  So we got some yummy food which I have no idea what it was called or what it was and just talked.  After I thanked him for the millionth time for helping me, he was like, “Lauren, you’re my sister in Christ.  Of course I’ll help you if I can.  All you have to do is ask.”  It was so comforting to know that I have someone looking out for me here :).

Friday was also one of the English teacher’s last day, so we had a cake and said goodbye to Borim.  It was really sad to see her go :(.  But she told me more than once that she really wanted to see me and hang out with me (she’ll still be in Gyeongju), so hopefully we’ll make that happen.

Oh, I also had an awesome teaching moment today!  Just before class, one of my students came up to me and started a conversation with me (which in itself is pretty rare…they’re all sooo shy to speak English).  She had written out a script beforehand, so she bumbled through it: “Teacher, I no speak good English, but I want talk more with you.  Is ok?”  She was so cute, and I appreciated her efforts so much.  Made my heart swell :).  I can’t believe how much I love teaching.  Sure it’s hard, and sometimes it’s frustrating, but I really really enjoy it.  That kind of hit me as I was sitting at the restaurant with Anthony.  I was describing to him the lesson that I had taught this week – it was about definite and indefinite articles (a/an/the).  These words don’t really exist in the Korean language, so Korean students have a lot of problems using them properly.  I told Anthony my topic, and he immediately asked me, “Wow, how did you make an interesting lesson out of that??”  A fair enough question, lol.  And so I started telling him….about the story that I introduced it with, and the schoolhouse rock song that we listened to, and the worksheet that we went through to check for understanding, and then the game at the end that everyone loved.  It’s true, articles is a pretty boring topic.  But it was one of my best lessons.  I think that was when I realized how much I love my job.

Well, the day’s a-wasting, time to get moving!  Sending my love as always!!