I’m not sure why, as I am not particularly looking forward to leaving Korea, but I installed a countdown app on my phone a few weeks ago, telling me exactly how many days I have left before I fly home to America.  Perhaps it’s because I wanted to be reminded not to waste the precious time that I have left.  Anyway, whatever the reason, it’s there, and since I cannot think of anything clever to call this particular blog entry, it will also have to serve as the inspiration for my title.

According to my little app, I have exactly 72 days left in Korea.  My goodness, how the time flies.  I mentioned that to my host sister yesterday, and she got all teared up.  We then had a very heartfelt conversation about family, in which my host sister started crying as she told about how lonely she was growing up, because her brothers were so much older than her, she was always in school, and her parents were always working.  “I have no memories with them,” she said on more than one occasion.  It about broke my heart….and also made me so incredibly grateful for the love of my own family. (on a side note….I met said brother this morning.  They came down from Seoul late last night to visit.  The sight of them stumbling out of their alcohol induced stupor to come out and give me a deep, solemn bow, and then go back to bed, was amusing to say the least, and it was all I could do to stifle a giggle.  Oh, Korea, there’s always some new charming little cultural oddity about you to discover….)  But anyway, back to In-suk…we’ve been having a lot of conversations like that lately.  I feel like we’ve grown really close, and I’m really going to miss her when I leave :(.

Not too much to report on the school front.  Last week was midterms, so I didn’t have school.  Rather than do more traveling, I elected to stay in town and work on my TEFL (Teaching English as a Foreign Language) certification, as well as other sundry things that needed to get done.  Not the most glamorous way to spend a week off, but I got caught up on a lot of stuff, and that feels great, so I am happy.  I also was able to finish an astonishing SIX units in TEFL (my normal pace is 1 a week), so I’m almost done with that!  Only 3 more units and I’ll be finished for life – super psyched about that!!  There were a couple of interesting things at school recently.  Yesterday was the 63rd anniversary of my school.  There was a big presentation that included all of the students and teachers (both high school and middle school), and lots of award giving and clapping.  Apparently the English department received an award, and I was sent up to accept it, although I’m still not quite sure what it was for….welcome to my life in Korea.  Lol…

I was chatting with one of my students from winter camp on Facebook last night.  I told her that I missed teaching her, and she told me this: “We also always talk about you, Lauren :).  Lauren’s class was everything what I remember during vacation!!!  We were very enjoyed about your class :D.”  To which I replied, “Oh that makes me so happy I almost want to cry!”  And then she said, “It’s really what I’m feeling, too!  Lauren is a really good teacher. As we (who Lauren taught English to students) know~~~~”  Needless to say, any residual grumpiness that I may have had about Korea evaporated in that moment :).

Other than that, I don’t have much to report.  I haven’t done any traveling – going on 3 months now in the same city, closing on a record for me! 😉 – although I have been making a big effort to spend time with my friends in Gyeongju.  Check out pictures from some of our escapades below.

Recently an English teacher from school from school, Mrs. Oh, has taken an interest in befriending me.  I’m not sure why, it kind of happened out of the blue – last semester we hardly ever talked.  I have a suspicion that it’s because she thinks I’m lonely – she was very lonely during her time spent studying English in Canada, and so I imagine that she thinks I’m having a similar experience.  While I am not, I am more than happy to be her friend.  We went to a little ceramics festival and then dinner in Gyeongju a few weeks ago, and then to the Silla Millenium Park last week (a sort of cultural activity theme park), and we have plans to go out together again this weekend.  At the millenium park, she bought me a set of blown glass earrings and necklace, which are really lovely.  We also got to see a wild horseback riding performance (they were doing all sorts of crazy flips and stunts with the horses running full speed!), but my favorite part was when the security guard allowed us behind the restricted area of the set of Queen Seondeok (an epic drama about the famous Queen of Korea who, incidentally, my school is also named after) and took our picture sitting on Queen Seondeok’s throne.  It was awesome :).  And now you know almost everything happening in my life these days! 🙂 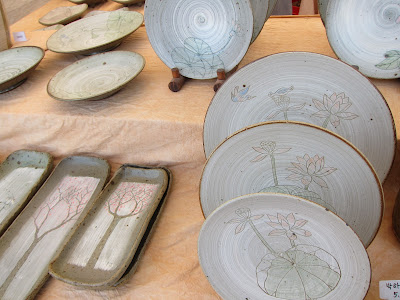 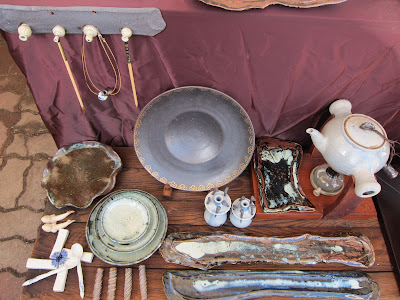 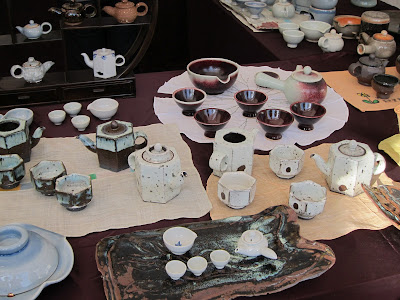 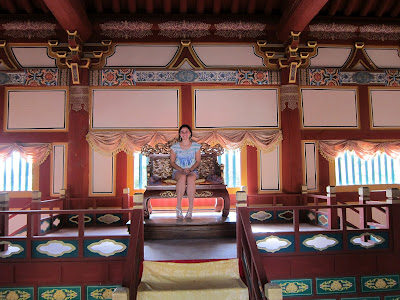 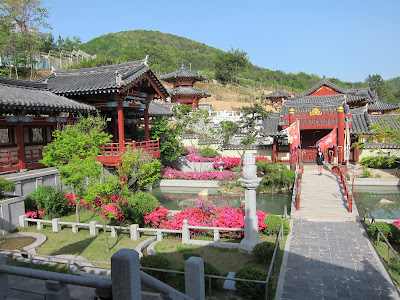 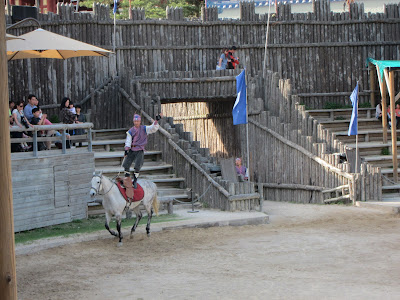