As a Fulbrighter, my work visa allows me 28 days of travel abroad during my grant year.  I spent 14 of them in America for Christmas, leaving me another 14 to see as much of Asia as I could.  And I wanted to see all of it.  Although that was a rather implausible goal, I did see as much of it as I possibly could in the short time allotted to me.
My travels started off in Malaysia, on an extended layover.  Although flying directly to my destinations would have been much easier, the low-budget airline AirAsia makes travel far cheaper if you first go through their major hub, Kuala Lumpur.  So, since my money is currently far more important to me than my time, I decided to route every trip through Malaysia.  It made for some interesting travel situations that I might have tried to avoid if I had know about them in advance, but I didn’t know, I made the plans, and in the end I survived a wiser and more experienced individual.  So anyway, onto Malaysia…
My first layover in Kuala Lumpur was quite extended – around eight hours.  And, since several of my friends were already in KL, I decided to leave the airport and spend the day with them.  After dropping my stuff off at their hostel, we hit the town.  Since they had already been there several days, they had the town scoped out, so we were able to make the most of my limited time.
So first we hit the Petronas towers, KL’s famous twin towers.  Soaring hundreds and hundreds of feet into the air, they are a glass and metal masterpiece that is truly impressive to behold.  And inside, they are a modern shopper’s paradise – literally dozens of stores selling thousands of items, all at the very top of fashion.  We didn’t stay there long, however; the majority of our time was spent at the KL tower, one of the tallest towers in the world.  We looked around for a while, and then went to the animal exhibit (I held a snake!!  It was awesome :].  I was surprised at how difficult it was to hold…it was always trying to wriggle away from from me!).
And then…that was it.  Before I knew it, I was on the metro, on my way back to the airport.  It was such a short time, I hardly had time to even realize that I was there before I was already leaving.  But, short as it was, it was really nice to start my travels off with people that I love and care about, since the rest of my travels were mostly solo.  I definitely started my whirlwind tour of Asia with a bang! 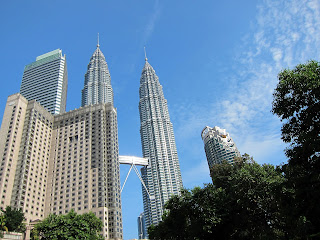 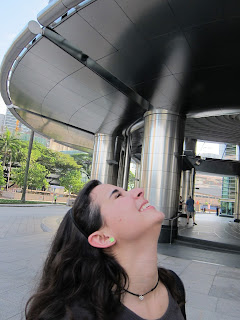 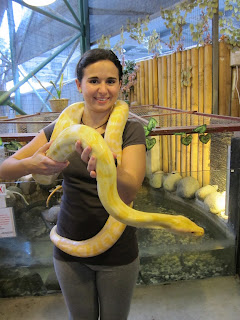 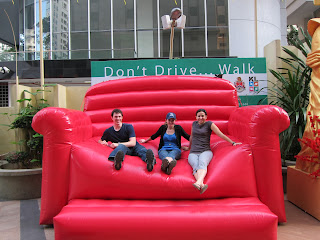 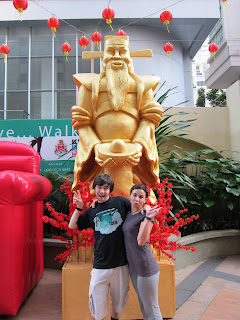 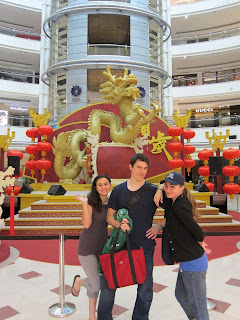