Well I know it’s been over a week since I last wrote in my blog, but never fear, I have not forgotten about you!!  It is probably not an exaggeration to say that I tried to sit down and write an update at least once a day, but there simply is not enough of me to go around :(.  Before this week, I did not think that it was humanly possible to be as busy as I was – or as exhausted.  I suppose it’s good – it certainly keeps me from being bored.  It’s hard for me to believe that I’ve already been here a month – my life feels like it’s on fast-forward!!  But I got to rest today, and I’m not nearly as exhausted, so let me tell you all about it!! 🙂

I’m now three times as experienced a teacher as I was when I last wrote.  I have now taught a grand total of…are you ready??….THREE lessons all by myself!!  My second lesson was pretty interesting.  The theme of the day was “Heroes in our lives,” so I decided to use it as an excuse to talk about 2 things that I love – homeschooling and my mom.  The hero in my life that I talked about was my mom, because she taught me all the way up until college, so I got to talk about both my mom AND homeschooling.  It was so much fun!  I had the kids create a mini lesson plan, and brainstorm together and have a debate about the pros and cons of homeschooling, and we played games, and it was a blast.  My third lesson was a team lesson – I worked with another ETA to teach about world heroes.  It also went really well, and I’ve basically decided that I LOVE teaching ESL :D.

I’ve finally regained my energy from this past weekend – a week later.  On Saturday I went on a hike up a famous Korean mountain called Songnisan with about 40 other ETAs.  We all split up into different groups and just explored the mountain for the day.  A few groups took a wrong turn and ended up going down the other aide of the mountain, and they had to take a 30 minute taxi ride back to our side of the base of the mountain.  Oh, I also had my first victory against the Korean language!!  I ordered a meal all by myself after the hike – I said hello, and ordered, and asked how much it was (and understood well enough to give exact change!!), and said thank you.  It was very exciting – I was so proud of myself :D. 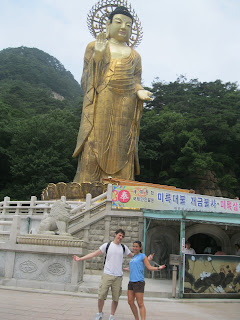 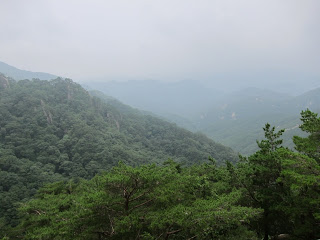 On Sunday, we had activity weekend!  Every ETA had to help participate in 1 weekend activity for Camp Fulbright.  I volunteered to help plan the Sunday morning activity – Superhero Training Academy!  We had 6 different stations, and at each station the kids learned a different skill that they would need to be a superhero – strength, agility, disguise, etc.  It was alot of fun, but the activities were divided between rooms that were separated by 2 floors, and because I was running the event, I was constantly running up and down the stairs in between the two rooms.  I probably ran up and down then 30 or 40 times in the spans of 2 hours.  So between that on Sunday, and Songnisan on Saturday, I was pretty wiped out.  I’ve also been sick the past few days – raging fever, horrible chills, headaches, nausea, the whole shebang – so I’m sure that did nothing to make me less tired.  But don’t worry, I’m doing much better now :).

It’s probably also taken me longer to get over my exhaustion because I’ve been getting up much earlier than I was used to doing.  While at Songnisan, I hung out all day with 2 people from orientation, Sarah and Dan, and we really bonded a lot.  Well, ever since then, Sarah and I have been getting up before breakfast and having a Bible study together outside (I expect that her name will come up alot in future blogs, both in this one and my other one, wayfarerontheroadlesstraveled.blogspot.com).  It’s been so nice to have someone to confide in, and share my struggles with, and pray with.  This past weekend was pretty exhausting, both physically and emotionally, and having a friend nearby was exactly what I needed.  I love that God always sends us exactly what we need when we need it :).

So yeah, Camp Fulbright and Korean classes and getting to know the Lord more and being a good friend and various other sundry things have definitely kept me busy this past week.  There was a trip with some other ETAs planned for the weekend, but I decided to stay in Goesan and relax.  Sarah and I planned a movie night for Saturday night, and about a dozen people came.  We went into town and bought popcorn and snacks and drinks beforehand, and it was alot of fun.  We didn’t really plan much in advance, so I was quite please with the attendance.  It was really nice to just have a chill night hanging out with friends, not worrying about lesson planning or event planning or studying Korean (although that’s #1 on my to-do list for tomorrow!!).

Oh, one last thing before I call it a night!!  I know this blog is all over the place, and I apologize for adding to the randomness, but this is important!!  I now know where I’ll be teaching for the next year!!  The placement ceremony was on Thursday night – it was a very exciting, emotional evening.  I’ve been assigned to an all-girls private high school in 경주 (Gyeongju).  I didn’t get anything that I requested – I asked for a co-ed middle school or vocational school with easy access to transportation lines, and I’m in an all girl’s high school – I shudder to think of all that estrogen!! 🙂 –  about an hour away from a major transportation hub.  But you know what?  I’m ok with that.  I have a feeling that Gyeongju could be even better than what I was hoping for, even though it wasn’t what I though I wanted.  Doesn’t God have a funny way of surprising us like that? 🙂  Gyeongju is the most historical city in all of Korea – it’s known as “the museum without walls” – it also has a brand-new (as of this year!) stop on the KTX line (Korea’s bullet train that services most big cities), a girl from the Fulbright Bible study was assigned to the adjacent middle school, and basically I’m just pumped to see what God will do in my life this year.  I have to make the most of my time with Sarah now, though, because she was placed almost as far away from me as possible – 9 kilometers from the DMZ :(.

Anyway, that’s all for now….it’s bedtime on the other side of the world!!  If you want to know more about Gyeongju, here’s a tourist link for the city: http://asiaenglish.visitkorea.or.kr/ena/SI/SI_EN_3_6.jsp?cid=309379#04.

Sending my love, as always,
~Lauren