Wow.  The last few days have been such a blur.  Spring has officially sprung here in Gyeongju, and I’ve been making the most of the beautiful weather.  I shall have to go with the reader’s digest version, since I still have lesson planning to do tonight and sleep is closing in on me fast.

Last week I only taught on Monday.  Tuesday and Wednesday I had off – the students had some sort of test; I never really know the reasons for why I get days off when I do, lol.  But anyway, whatever the reason, I had no class, so I had 2 glorious days of nothing to do.  On Thursday I went to school, although I didn’t teach.  Thursday was the day of the school English festival – “Sunnies’ Festival,” as it is called here.  I shall forever refer to it affectionately as the Day of Mass Chaos.  All day, plans, locations, events, everything was constantly changing on the spur of the moment.  That would have been stressful enough; but the real problem was that all of the last-minute decisions were made after a flurry of hurried conversation in Korean.  Which means that I was left mostly in the dark.  Which wouldn’t have been horrible; except I was running a couple of the events.  Yeah.  Not cool.  But I managed, made it through the morning, and then was left the afternoon to simply enjoy the rest of the festivities.  There was a pop song competition that a lot of students performed it – that was really fun to watch.  Check out the top 3 dances in the videos below, along with some pictures.  The highlight for the students was when they dragged a bunch of teachers up on stage after the performances (myself included), and made them dance improv.  Hmph.  I’m still trying to figure out if I enjoyed it or was traumatized by it.  But judging from the number of comments I got from students afterwards, I would say that doing the robot with the principle was definitely a success ;). 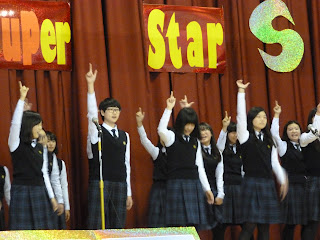 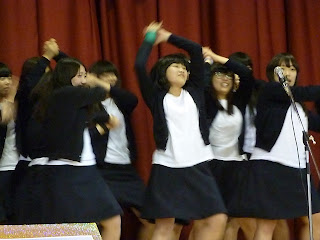 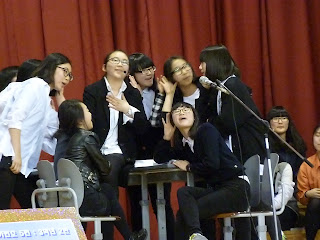 Thursday was rounded out by a parent-teacher dinner.  I was shocked to find out that apparently my host mother is the president of the parent-teacher association, and dismayed when she started pressuring me to sing karaoke – introducing myself in Korean in front of the entire room was just about enough cultural bravery as I could handle for one night.  But I got a good meal out of the evening, and was able to escape with a fellow teacher before the singing started, so it all turned out ok :).

Friday was another school event, the annual school “picnic.”  This was another source of confusion, as we were originally going to all walk together to Gyeongju World (a small amusement park); for some reason the school had decided that it is a valuable tradition to make everyone walk the 2-hour or more walk to Gyeongju World for the school picnic.  But then Thursday night, it was decided by someone that we would walk to the Expo park this year instead; then we were taking buses; then we were going to Gyeongju world again, but this time taking buses instead of walking; in the end, it was finally decided the morning of that everyone would just meet at the theme park, using whatever method of transportation they wanted to use.  The last minute plans were difficult to stay on top of with my limited Korean, but in the end I was very grateful to not have to walk all the way there :).  And I had a lovely time, too – a group of students claimed me as “theirs” for the day, so we hung out together and rode all of the rides and everything.  It was fun :). 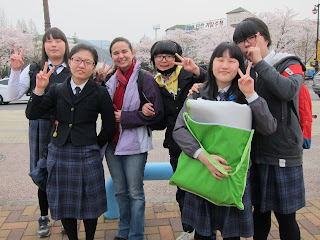 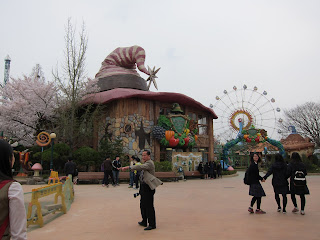 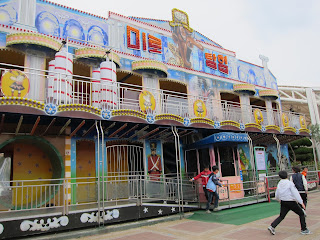 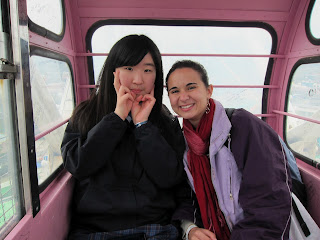 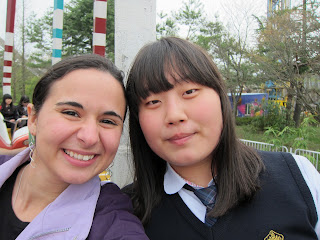 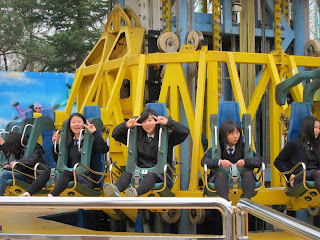 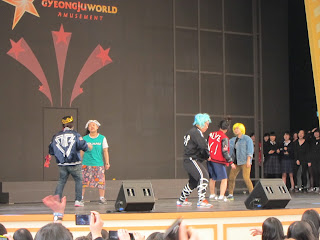 Saturday, my friend Lin and I decided kind of last-minute to go cherry-blossom hunting.  Gyeongju is famous for its cherry trees – there are thousands and thousands of them scattered throughout the city, when they’re in bloom they really are extraordinarily pretty.  However, the blossoms only bloom for about a week out of the year, so once they start you’ve got to take advantage of it!  So we rented bicycles and just rode around the city, hitting all of the cherry blossom “hot spots.”  Apparently half of South Korea had the same idea as us.  The streets were jammed with cars.  I’m talking apocalyptic evacuation, city traffic after a GA Tech / UGA football game.  Major, major traffic.  I was exceedingly grateful that I was not stuck in a bus.  But we were on bikes, so we avoided the traffic and got to take lots of lovely pictures :). 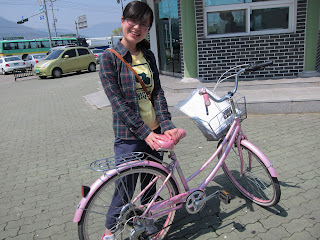 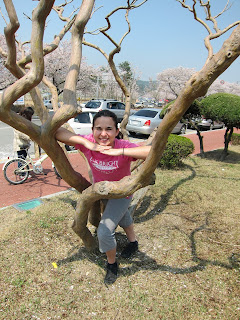 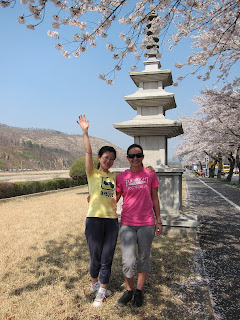 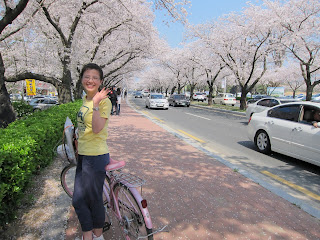 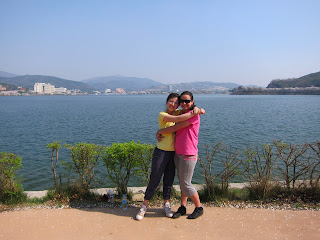 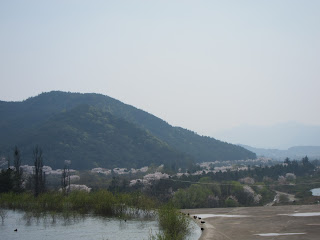 Sunday, to round out the weekend, I went to church.  I was joined by my friend Lorna, who I had met last year at the church retreat in Daegu.  We hadn’t seen each other for a while, but she came to town to visit this weekend, so we got to hang out for the day.  It was lovely.  We went to church, and played frisbee for a while, and then came back to my house for a while.  Lorna was actually the 1st person I had ever brought with me to my house!  It was very exciting :).  And then in the evening, we met up with Lin and her husband Pan, to have dinner with some friends of theirs.  It was a home church, so we had a scrumptious dinner with them, and then a little worship service afterwards.  It was wonderful to see such a passionate group of believers.  I’ll never forget, as we were leaving, the little 10-year-old boy started sobbing.  I asked him why, and he said it was because his mom had told him that he had to stop reading his Bible because he needed to go to sleep.  Really made me stop and think about my priorities in my own life…  But anyway, it was a lovely way to round out the weekend.  Plus they had a little 13-month-old daughter, who was absolutely preciousssss.  I asked to hold her, and she just loved me!  Was cuddling her head into my chest, and wouldn’t go with her parents when they tried to take her away.  It was adorable :).  And that’s it!  Monday came again hard and fast, with me jumping right into my regular classes and Korean studying, and being informed that I’ve just been given 4 additional classes starting this week.  As of today I have exactly 3 months left in Korea, and I really want to finish strong, no matter what they throw at me.  Wish me luck!

My school had a festival yesterday.  They had been preparing for it for weeks, and honestly, by Thursday afternoon, I was just ready for it to be over.  It was a huge deal, including the entire school and city, and preparations for it had everyone in the office stressed and on edge.  So Friday morning, bright and early, I showed up at school….and it was mayhem.  For the first hour or so, everyone was running around getting ready.  I didn’t know how I could help, so I just tried to stay out of the way.

The first couple of hours after the festival started was pretty rough for me.  A school festival in Korea means no classes and fun things to do, so of course all of the students had grouped themselves into their little knots of friends and were walking around together enjoying the sights.  Unfortunately, though, I didn’t have any of my friends to walk around with, so it was really awkward at first.  Everyone was really friendly and said hello, but waving in the hallway and actually hanging out together with someone are definitely not the same thing.

It was only about 10:30, and I was already contemplating leaving, when a few of my students came up to me.  They looked both excited and nervous, and I could immediately tell that something was up.  Eventually I figured out that they wanted me to spend the festival with them.  I emphatically said yes, and my festival experience after that took on a decidedly different character.

We ate food, and watched a movie, and hung out in their homeroom (and got lots of surprised reactions from other students who walked in and saw me there!), and watched the student and community performances at the end of the day, and overall just had a grand time.  I got dragged into a few rooms by random students – I have no idea who they were – and was always greeted with a chorus of cheers and cries of “TEACHER!!!” or something to that effect….I think the best room was the black room.  Which was actually a black-lit dance room.  And I danced.  And they flippedddddd outttttt.  My host father was there for a little while (I’m still not sure why), and he saw me interacting with some of my students.  When we got back home that night he told me that I was “인기 장” with my students – “most popular.”

I gave my number to a few of my students while we were hanging out, and they all texted me later saying what fun they had, and how happy they were to have spent the day with me.  One of my favorites, from Na-young, said this: “Hi I am Na-young.  Today I’m vary happy with you.  I’m awkward in speaking English.  but I think I have learned so much English becouse of you.  I am vary thankful about that.  See you next class and have a good dream.  byebye ^_^”

A lot of the second graders, the ones I subbed for last week, have also started calling me teacher.  Many people whom I can only assume are students, came up to me at the festival to say hello. It’s strange to me that these girls who I don’t really know at all can be so friendly with me…but I like it :).  Some of them even introduced me to their friends from the local boys’ high school!  They were super friendly…although one of them decided that I’m his girlfriend now =/.  Still, I had fun talking with them.  Overall, a wonderful day.  Enjoy the pictures and videos! 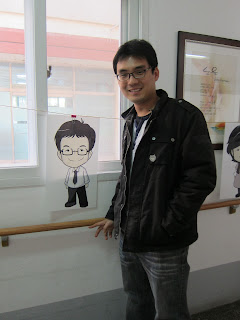 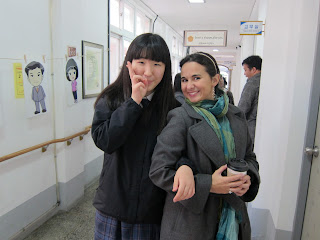 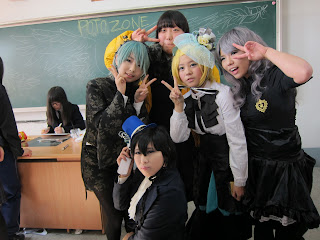 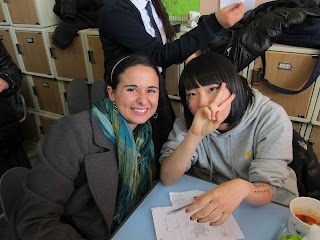 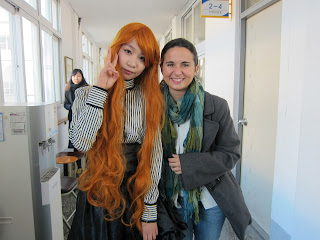 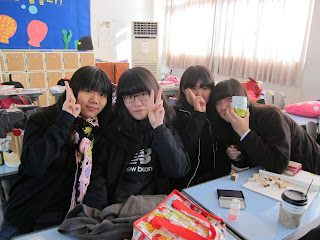 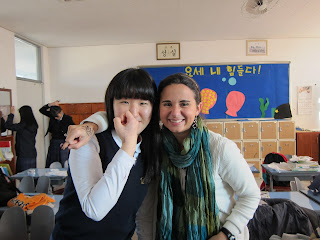 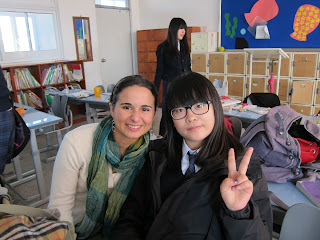 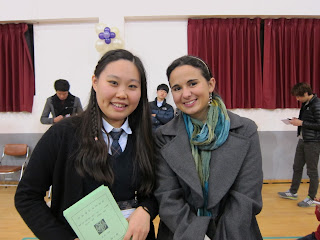 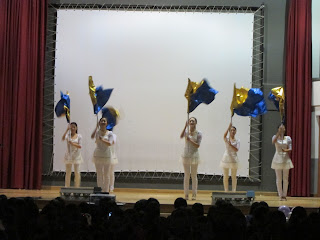