I seem to have finally been cured of my previously insatiable wanderlust.  While I spent nearly every weekend last semester traveling, this semester I don’t want to go anywhere at all.  Even my upcoming trip to Jeju Island, one of the most beautiful islands in the world, I’m looking at with more than a little bit of trepidation.  After going all over Korea and southeast Asia, it seems that both my wallet and my sleep patterns have had quite enough moving for a while.

But then again, perhaps I don’t want to travel simply because I like where I am.  I’m finally finding fun hobbies and wonderful friends….and of course, I love my host family :).  My host sister came to church with me on Sunday – that was cool.  And then we made dinner in the evening for my host parents – this one was an even bigger hit than the fajitas!  We made a chicken / pepper / bean / corn / green pumpkin / whatever else I could find concoction that was really really tasty, if I do say so myself.  In between church and dinner, I went out to lunch with some people from church.  We went and got Korean pizza (have you ever had sweet potatoes on your pizza before??), and talked and laughed – mostly in Konglish, with a little bit of Chinese thrown in there, just for kicks – and overall just had a great time.  I love my friends here <3.

Speaking of friends, Saturday was also a lovely day with friends.  In the morning, I had Korean class with Si-yeon – she bought me lunch at this superrrrr yummy Japanese noodle place.  Then in the afternoon, I met up with my Uzbekistanian friends for a picnic – they brought the fruit, I brought the drinks and kimbap.  At the kimbap restaurant, I ran into another foreign teacher here, also named Lauren, and I invited her to come along.

So the four of us trooped out to the royal tombs to eat – it sounds morbid, but it’s really not.  They’re just big hills dotted all over the city; make for lovely walking and picnic places.  So yeah, we found a nice spot, and had a lovely afternoon picnicing….I was so excited!  It’s been years since I’ve had a picnic, and I was literally giddy, lol.  Afterwards we were going to go take sticker pictures together, but the place was closed, so instead we elected to go to a coffee shop and buy something to warm us up – it was so windy outside!! 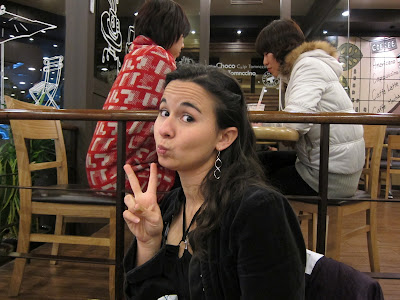 So that was my weekend.  Additional noteworthy highlights include playing badminton with my host family – in the house (don’t worry, we were gentle, lol), and the taxi driver who gave me a Lolli-pop and a mix CD just because, totally brightening my really crappy day.  All in all, quite a lovely 2 1/2 days.  My following week has been comparatively lovely, too – much less stressful than the previous weeks.  As I had hoped, with the projects dying down at work, so has the stress.  Four days in Jeju start in a day and a half!