Wow.  I have so many things to talk about.  I’m not quite sure where to start….

Ok well, let’s begin at the beginning, I suppose.  I’ve had quite a bit of changes and experiences over the past few days.  Early last week, I organized a ballroom dance for the ETAs and Koreans who happen to be here at campus.  About 15 people came – which was pretty good, considering how busy everyone was.  They were all beginners, so it was basically just a big lesson, but it was still fun.  Any dancing is better than nothing.  I’m so looking forward to finding regular dancing places once I get to Gyeongju :).

Friday morning I had to give a 3-minute speech in Korean.  It wasn’t very good, but a speech it still was.  It’s astonishing to me how much Korean (relatively speaking) I’ve learned in just 6 weeks.  To think that only a little over a month ago, I didn’t know a single word of Korean; and now I can have a basic conversation!  It’s pretty exciting :).  Speaking of Korean, today was my last day of Korean class.  It was very sad.  Yesterday we had our final, so today we just got the tests back and played games and pranked the other classes and watched K-pop (Korean Pop).  I got a 93% on the test; considering the amount of material that it covered and how much I struggled understanding it at the beginning, I was quite pleased with that :).  Class today was my first real experience with K-pop, and I must say that I’m hooked.  The songs are so catchy, the music videos are awesome, and the whole genre is slightly ridiculous.  It’s awesome, I love it :).   You can watch a popular K-pop song by Super Junior by following this link.  Also, check out the pictures and videos below of my teachers from class today….this is why I love them!!!  I’m going to miss them so much… 🙁 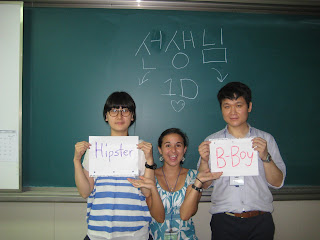 Last week I also went to a traditional Korean tea ceremony.  We sat on the floor, and got to make the tea, and pour it into the little cups, and had strange little rice cakes things of which I have no idea what the name is.  It was lots of fun :). 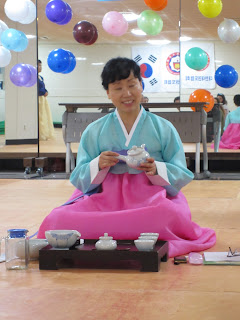 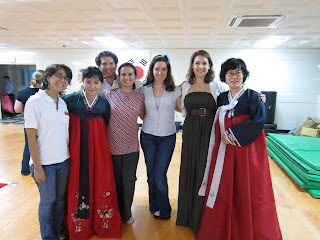 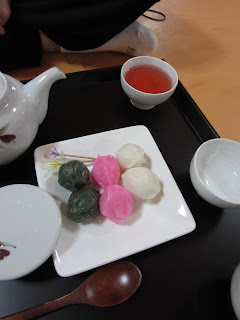 I also passed my yellow belt test in Taekwondo!  There was a form test, and then we had to do a few kicks that we had learn, and break a board.  That was exciting :D.  We sparred with each other in class today.  I guess the teacher got bored, though, because then he decided that he wanted to spar with me – a 5th degree black belt against a brand-new yellow belt.  Let’s just say I’m hurting pretty badly now….I’ve got cuts and bruises all over my hands, my foot is bruised, and I can’t lift my right arm.  But it was worth it :D. 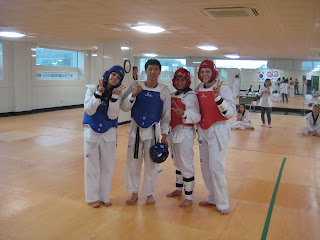 Well, we’re going to Seoul this weekend and we’re leaving at 5 in the morning, so I suppose I should go get some rest.  I’ll update you on my adventures in Seoul soon!  Love you!!