My second layover in Kuala Lumpur was just about as long as the first one.  However, since this time it was in the middle of the night, I decided to just find a place to sleep and not do any sightseeing.  I looked online and found that there was actually a hotel in the KL airport, so I booked a night there and thought that that was that.  But when I arrived in the airport from India, I found out that this hotel is not accesible from the lost-cost carrier terminal….my terminal.  But, no sweat, there was a hotel just a few minutes away from the terminal, technically still on the airport grounds.  They even offered a shuttle service!  So I walked to the shuttle…and that’s where my problems started.  The shuttle was full, so the driver told me that I should walk.  Somehow, I doubted the wisdom of his scheme to tell a single girl to go walking by herself in the the middle of the night in an airport in Asia, but I was super tired, so I just silently walked the hotel.  All I wanted was a bed to sleep in.  But alas, the universe had other plans.  I arrived at the hotel to find that they were completely booked.  So I slogged back to the airport, by this time thoroughly prepared to spend the night sleeping on a chair in the airport.However, as I was getting settled on my little chair, I happened to glance over and noticed a sign for the airport’s “premium lounge.”  I initially balked at the price, but then I decided that a safe place to sleep and a shower were more important, so I bit the bullet and paid the price.  But it was so worth it in the end.  I had such a limited time in Cambodia, that I would not have been able to enjoy it if I had been sleep deprived and grumpy the whole time.  As it was, I got a shower, had reliable internet for a while (and even got to talk to my mother while I was there, woot!), took a shower, got some sleep, AND had breakfast.  Definitely worth the money.

My hostel in Cambodia was as wonderful as the first hostel in India was horrible.  They were there waiting for me at the airport (in a TUK-TUK, no less!!), and took me to the hostel free of charge.  The main lobby area of the hostel is also an outside restaurant / hangout area.  It is covered with hanging plants, and cool quite nooks to sequester yourself in, and flowers, and gentle water rippling in the background.  Upon checking in, I was greeted with an incredibly friendly staff who made the arrangements for any sort of excursion that I wanted.  They even greeted me with a fruity drink, to refresh me from my travels!  Walking into the room, I was greeted by a huge bed (which also happened to be the most comfortable bed I’ve ever slept in…ever), a modern bathroom….and flowers!  They had scented jasmine flowers strewn all over the room!  I had been in Cambodia less than an hour, and was already in love with it. 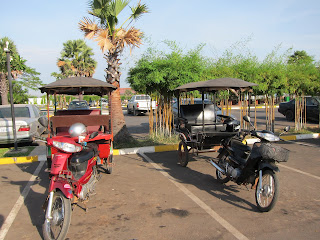 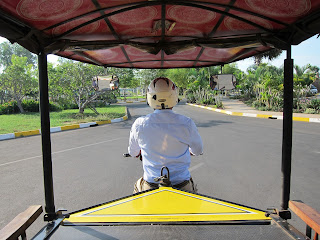 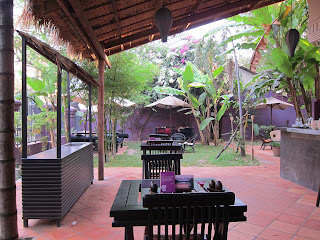 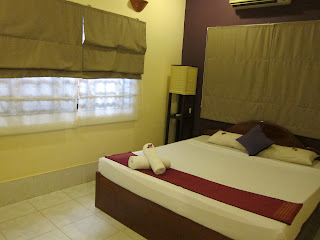 I was determined to make the most of my extremely limited time there, so I dropped my stuff off and immediately headed out again.  I felt as safe in Cambodia as I felt unsafe in India, and decided to go exploring on my own for a while.  I hired a tuk-tuk to take me to the arts district, and then let him go so I could meander home on my own.  So I walked through a place called Artisans of Angkor, which takes young artisans from all over the country and gives them a year of training in their craft, so that they can make a living doing it.  Pretty cool place…. 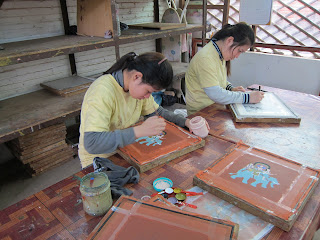 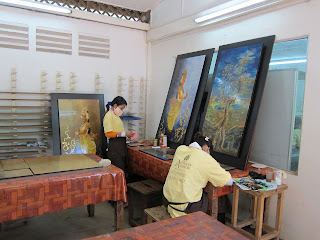 Walking home, I got asked by several drivers if I needed a ride.  But the beautiful thing about Cambodia is that they respected my answer when I said no.  In India, people would follow you for blocks and blocks, entreating you to to buy their products the entire time, no matter how strenuously you denied their offers.  But in Cambodia, they asked once, and if you said no, they backed off and let you be.  It was a wonderful thing.

In the afternoon, I went on a boat cruise down the Tongle Sap lake.  The ride lasted about 4 hours, with a few stops mid-way.  The main ride took us through a huge floating village in the middle of the lake.  It was fascinating to see these people living completely, constantly on the water.  I wonder if they ever yearned to be on land for a change of scenery, like I sometimes yearn to be on the water.  There were other people on the tour with me, mostly from France.  My one semester of college French allowed me to make some small talk with them, but I was really wishing that I knew a bit more.  But it was still a blast.  Being on the water, with the cool breezes ruffling through my hair, was so incredibly relaxing.  I could have stayed there all day.  The only thing that I didn’t like was the snake children.  Cambodian women have a habit of putting snakes (non-poisonous ones, I hope!) around their small children’s necks (we’re talking, like 3 and 4 year olds).  Then then paddle around in small boats when the tourists show up, and anytime someone wants to take a picture of their child, they extract a small sum from them.  I’m not sure exactly what it was, but something about that particular practice really really bothered me. 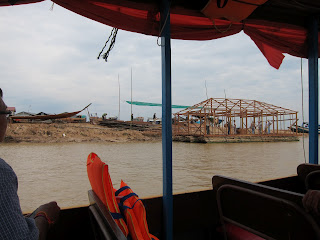 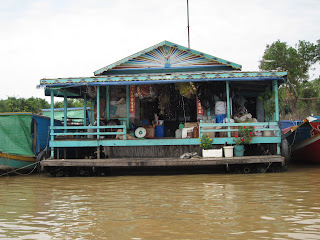 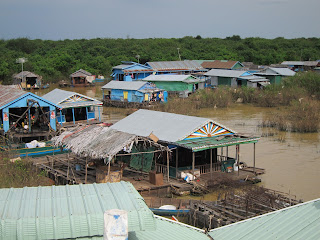 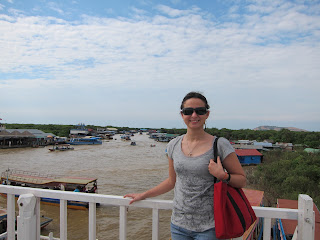 But anyway, Cambodia was a wonderful experience, so let’s move on to happier things! 🙂  My hostel is owned and operated by a lovely Australian couple.  Twice a week, they offer an all-you-can-eat Australian bar-b-que.  So that’s where I found myself Tuesday evening.  Boy I tell you what, when they said all-you-can-eat, they meant it.  There were chicken kabobs, and beef kabobs, and vegetarian kabobs, and all sorts of grilled meats, and sausages, and salads, and potatoes, and fruits, and breads….it was amazing.  I went to bed one very happy puppy that evening.

The next day I headed out to see Angkor Wat, the largest temple in the entire world.  I was planning on getting up early and watching the sunrise….but my bed was far too comfortable.  So I missed the sunrise, and I’m entirely ok with that….the bed was worth it :).  I was on a different tour with different people this time, some of who also spoke a foreign language.  Except this time, they spoke Spanish…and I was in heaven!  There was a Taiwanese couple who spoke fluent English, a lady from Colorado named Carolyne (more on her later!), and a couple from Madrid, Spain.  She spoke a little bit of English, but he spoke none at all, and so the three of us talked in Spanish almost the entire day.  It was amazing…I had forgotten just how much I love Spanish – speaking it, hearing it, everything.  Reminiscing about Spain was just an added bonus :). 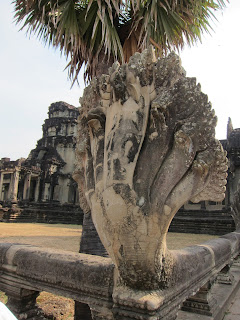 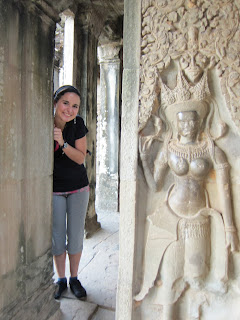 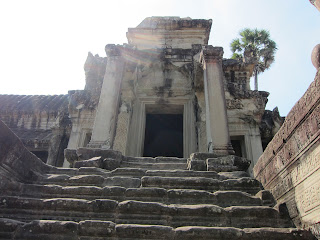 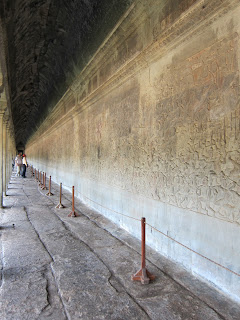 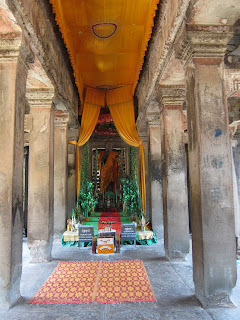 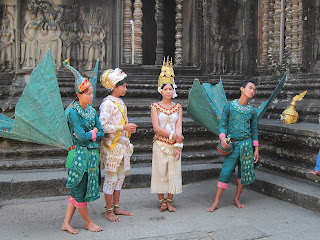 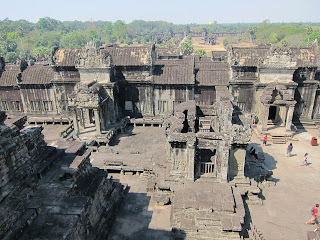 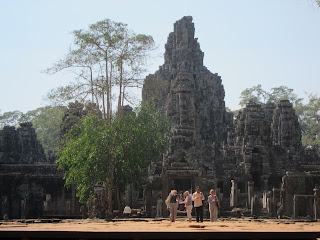 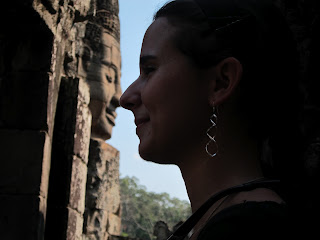 So anyway, we spent the whole day on a walking tour through the temples of Angkor.  It was really cool at first, but I have to admit, by the end of the day, they were all starting to look the same.  The other American in the group, Carolyne, was in her 70’s, and she finally called it quits when we got to the last temple, and waited for us while in the van while we were walking.  Honestly, I wanted to do the exact same thing, but I refused to be outdone by middle-aged people, and so my stubbornness won out and I persevered :).  But regardless of our age difference, Carolyne and I really hit it off on the tour, and she invited me back to her hotel when it ended to go swimming.  As sore as I was from all of that walking, I gladly took her up on her offer.  So I went swimming in my jean shorts and t-shirt (I hadn’t brought a bathing suit), and we just talked for a couple of hours.  She’s a fascinating woman.  She’s a French and art teacher, and has lived for extended periods with her husband working as a teacher all over the world.  Now that he’s gone, she travels the world on her own seeing as many things and meeting as many people as she can before she dies.  I want to be like her when I grow up :).

I had to cut our visit short, however, because I had a dance to go to!  Cambodia is famous for their traditional style of dance, Aspera dancing, and my wonderful hostel had arranged for me to go to an Aspera show in the evening.  The performance was in a big buffet-style hall, and because I was a party of one I got seated alone at a small table right near the front.  The view was great, but the seating was rather lonely.  But that was quickly rectified.  A woman was walking by me as I was getting settled, and she happened to say, “Oh, you’re here alone?  Me too!”  So I invited her to join me, and she accepted, and we had a wonderful talk.  Liliana was just as fascinating as Carolyne was.  She was born in Columbia, but moved away when she was 18, and now lives in Switzerland.  So in the end, I got the best of both worlds – a great view, and also someone to share it with :). 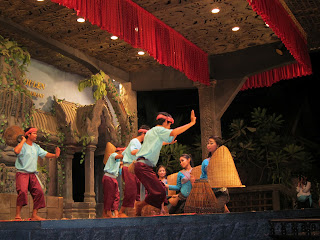 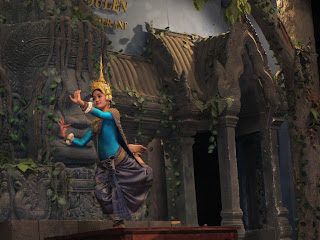 And that was it.  That was the entirety of my stay in Cambodia.  I took a Tuk-tuk to the airport early the next morning, bought a coconut for breakfast (which, suffice it to say, undoubtedly put me on cloud nine), and headed back to Kuala Lumpur.  Even the airport was lovely this time, with a huge Lunar New Year’s celebration going through the terminals while I was there.  One of the flight attendants gave me 2 oranges…which became my dinner that night :).  Cambodia was the epitome of relaxation and rest, with the warmth of the sun rivaled only by the warmth of the people, and I can say with ease that I most certainly want to return there sometime in the near-ish future.