The capital city of Seoul is a bustling metropolis of super-sized proportions.  The city, which over 10 million people call home, seems to extend forever.  It is exciting and overwhelming, diverse and homogenous, fancy and cheap, all at the same time.  My time in Seoul this past weekend did not disappoint in any of those categories.  But I suppose I am getting ahead of myself…

We left Goesan for Seoul bright and early Friday morning, around 5:00 am in the morning.  On our way to Seoul, however, we made a detour – to the DMZ.  I’ve always thought that the DMZ  – which stands for Demilitarized Zone – is an ironic name for possibly the most militarized place in the entire modern world.  As a part of our orientation, we were allowed to go as far into the DMZ as the actual border between North and South Korea.  And let me tell you what, it was sooo tense.  There were so many rules about how we should behave, gesture, or dress, or even where we should look.  We were checked by South Korean soldiers for identification on more than one occasion.  We had a security escort for the entire duration of the tour.

The thought that these two countries at war, these two mortal enemies, the thought that they were brothers and families at one point, and in many cases still are…..it broke my heart.  War is always bad, but when it’s between families, it’s even worse.  I realize that visiting the DMZ is a privilege that very few people have been afforded, but I have to admit that I was glad to leave it at the end of the tour. 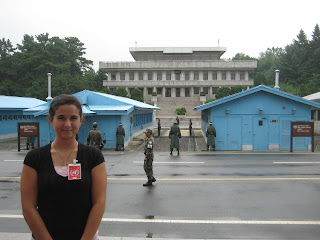 After the DMZ, we went to eat dinner with the American ambassador to South Korea, in her personal home.  At first it was supposed to be an outside pool party, but it got rained out, so it was moved inside.  Because it was moved into her home, that also meant that it was shortened, which meant that by the time we got there we only had about an hour to mingle and eat dinner.  It was a bit rushed, but I still got to eat a yummy legitimate American barbecue and talk with some really interesting embassy officials, including the ambassador.  Plus apparently her home is really famous, and it’s a very big honor to be allowed inside it, so that was cool. 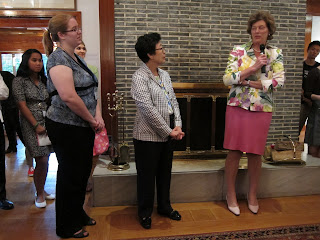 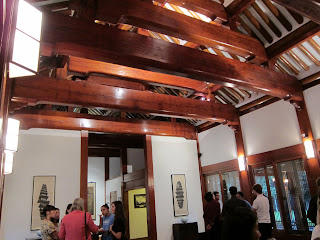 After dinner, despite our super early morning, some of my friends wanted to go out that evening.  You’ve got to make the most of your time, right? 🙂  So we went out for ice cream, and then went to a 노레방 (norebang; basically a Korean karaoke) – it was my first time!!  It was so much fun.  At one point I looked around and thought to myself, “look how much fun you can have if you’re not drinking!”  It made me happy to think that we were having a ball, and not a drop of alcohol was involved. 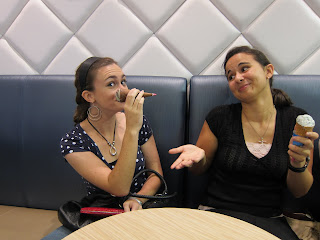 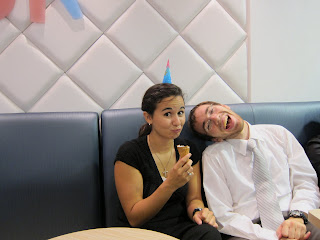 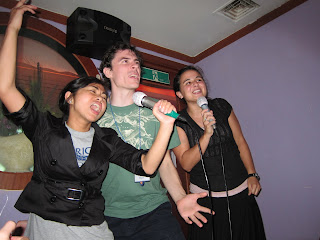 Saturday, bright and early, I went out with a group of friends for breakfast in the morning.  After that, they went shopping at Costco (ahh, the pull of American stores in foreign countries, lol), and I made my way to the War Museum.  Technically it’s a museum on all of the wars in Korea’s history; but in reality, it’s about the Korean War.  Two floors of the three-floor museum are devoted to that war alone.  It was pretty incredible.  Considering the subject of the museum, I cannot really in good conscious say that I actually liked my visit; it was, however, very moving.  To see the sacrifice, the heroism that those men displayed – both Korean and foreign – made me realize just how detached I was from the Korean War, and how little of it I really about.  It was very eye-opening and sobering.  I think my favorite part of the museum, however,, was when I was standing in the room with busts of famous and gallant Korean soldiers.  I had stopped at a particular statue, and was reading in awe about an officer who had post-humulously been awarded the highest honor in Korea after he had thrown his body over a live grenade in order to protect his men.  An elderly Korean man came up behind me and tapped my shoulder.  In broken English, he managed to tell me that the very man whom I had just been so admiring – that man had been his captain before his death.  It was very  moving, to say the least.  And then he let me take his picture with the statue, which just made it even cooler.
I had to rush out of the museum early because I had made plans to meet with some friends to go to the big shopping district in Seoul later that might.  None of us, however, are very big shoppers, so we didn’t stay very long.  We got some food, got lost a few times, I bought a pair of dress shoes because my friend informed me that the ones I was going to wear were simply not acceptable, and then we made our way back to the hotel on the subway.  I spent a lot of time on the subway this weekend 🙂

Sunday, our last day of freedom, dawned humid and rainy.  But we decided to go on an adventure anyway, and we made our way to Seoul tower, a huge tourist attraction that overlooks the entire city.  I had heard that you could get to the tower by cable car, so I looked up directions online on how to get to the cable car pick-up point.  However, because I didn’t have access to a printer, I had to simply take a picture of my computer screen with the instructions on it.  I’m sure we must have looked a sight – 5 foreigners, huddled around a little camera, trying to find their way through the backstreets of Seoul :).  But find it we did, and the ride to the top of the mountain was exciting, albeit gray and foggy.  Once we got to the top of the mountain, we decided not to pay for the ticket to the top of the tower because of the weather.  The view wouldn’t have been good, anyway. 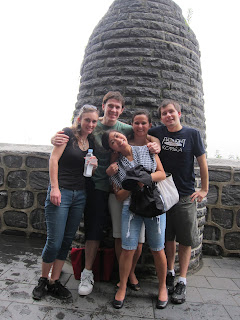 But we certainly didn’t do nothing!  Instead of going to the top of the tower, we decided to go to the…..Teddy Bear Museum!!  It’s a museum about the history of South Korea, but all of the people are illustrated with teddy bears!  It was really cute, I enjoyed it alot :). 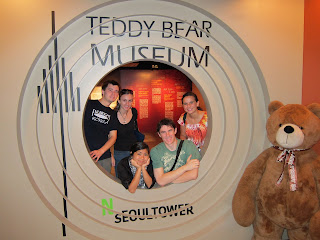 After the Teddy Bear Museum, I went out with a few others to eat at, and I quote, “the best noodle restaurant…ever.”  I must say, I think that was a pretty accurate quote.  I was in absolute heaven.  I have no idea what I ate, but whatever it was, it was incredible.

After noodles, I went to the English service at Onnuri church.  One of our orientation coordinators goes to that church, and so he took us with him.  It was amazing.  I have immensely enjoyed the Bible studies I have been a part of during orientation, but being in a large worship service is something that I had still been sorely missing.  The message was challenging and very timely applicable to the new life that I am about to start.  I was so glad I went.  Worshiping the Lord with a body of other believers refreshes my soul like nothing else can.

I was pretty tired after all of that, but in the evening some of my friends wanted to go to Insadong, the arts district, to get some rice cakes and other desserts.  After much hesitation, I decided to go with them.  I was super tired, but hey, you only live once, right? 🙂  It was alot of fun, I’m really glad I went.  It was really nice to be able to spend one last night out with the people who have become so dear to me before we all leave for our placements.

Monday had quite a different flavor to it.  Monday was my official graduation from Korea University – that was the school with which my orientation Korean class were affiliated.  It was a huge event.  All of our teachers were there, as well as all of the Fulbright office staff and, of course, all of the ETAs.  There were speeches, awards, and honors given.  Each class performed some kind of final presentation – some did skits, some did movies, some did K-pop dances, some did speeches, all were very good.  And after that….that was it!  We said goodbye to our teachers and left.  It was a very sad parting – certainly more than just a few tears were shed.

Well, that’s all of my adventures in Seoul this past weekend!  Adventures in Gyeongju will be following shortly!!